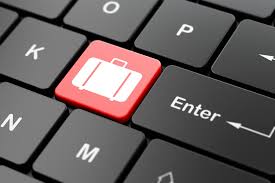 Having just returned from a vacation trip to Portugal, I had a chance to try out some travel-related tech products. Portugal has become a favorite destination for vacationers in recent years and for good reason. It’s a beautiful country, the people are warm and friendly, and it’s more affordable than many destinations in Western Europe. Portugal’s two main cities, Lisbon and Porto, each offer breathtaking views, excellent food and wine at modest prices.

Away Suitcase – When I reviewed the popular Away luggage, I had a positive impression of it, but wondered how well it would stand up over time. Now, after using their oversized carry-on rolling suitcase on several international and more than twenty domestic trips, I can say it has performed very well and has become my carry-on suitcase of choice. Even though it’s more of a hard-sided design, the shell is flexible enough to overstuff it and easily close without having to sit on it. One side of the two equally-sized shells has a panel that folds over the contents, and by pulling on 2 straps, compresses the clothing. The other half has a net that zips across the contents to keep them contained.  The one drawback to stuffing it closed is it makes the built-in battery difficult to remove if you need to check the bag. (No batteries are allowed in checked baggage). On one occasion I needed to open the suitcase to relive the pressure on the battery to remove it, when the airline required I check the bag. I really like this suitcase because it allows me to pack more easily and carry more and than my Briggs and Riley or Tumi 22″ suitcase.

Apple Watch – Traveling with the Apple Watch solves the issue of adjusting your watch when changing timezones; it’s all done automatically. When traveling I change to a face that also displays my home time. I also appreciate its health-related features that lets me track my steps with all the walking that accompanies visiting new cities. With the Series 3 watch now starting at $199 and $229, depending on the size, it’s a terrific bargain. It offers all of the essential features of the newest models at less than half the cost and matches the cost of the less-desirable FitBit watches. One caveat is that the Apple watch only works with an iPhone.

Ring Video Doorbell – Ring, now owned by Amazon, is under a lot of criticism for sharing the video taken from your home entryway with local police departments. While they say they require your permission to share video, they’ve entered in arrangements with hundreds of police departments to let them know where their door bell cameras are located.

But on this trip the product proved invaluable. It typically alerts you when there is motion at your door. You can then view what triggered it using its app. When it sent a successions of alerts on one occasion, I found that our housekeeper, Olga, was having trouble entering our home using our Shlage pushbutton lock. (Too much technology?). There seemed to be something wrong with the lock. I tried calling her, but for some reason my phone would not complete the call. So I used the Ring app to speak with her through the Ring directly to help her find another way to get in to the house. We carried on a video conversation much like a phone call using the Ring’s voice function. When I returned home, I discovered the battery in the lock had died.

International Phone Usage – Normally I’ve used a T-Mobile phone when traveling internationally because they offer 20 cents/minute calling, but more importantly, free data, so important while on vacation when you want to use Google maps, access the Internet, and all the new applications, such as the Ring example above.  But, I gave my T-Mobile line to my grandson as a graduation present and now use a Verizon account.

Verizon doesn’t have a comparable benefit, so my only option was to pay $10 per 24 hours for .5GB of high speed data, texting and free calling. The data was usually LTE or 3G, and worked fine. However, on many days I reached my data limit several hours before the 24-hour period came to an end. (The 24 hours of use can begin anytime you chose and is not tied to the time of day.) I could have bought another .5GB of data for $10 or revert to 2G, and suffer the slow speeds.

What’s the difference in speeds? Using Google Maps over 3G or LTE loaded instantly; using 2G often took 30 seconds or more for the map to fill out. In these situations, I recommend downloading maps using the Google Maps app for those areas where you will be spending time.  Go to the Google Maps menu and follow directions. These maps will now be accessible even without connectivity.

Of course, the best solution to reduce phone costs is to buy a local SIM card. But that means you can’t be reached on your own phone number. The Verizon solution, also used by other carriers, is an improvement over their previous plans that can results in many hundreds of dollars of charges for International usage. While 3G and LTE is vastly superior to 2G, I would have saved about $140 using T-Mobile over Verizon on the trip.

iPhone usage – Getting through a long day while traveling with your phone’s battery not dying has been a challenge with my iPhone X. Before leaving I had Apple replace my battery. They will do it if the battery has dropped to 80% efficiency or less. (You can check by going to Battery Health under Settings.) If you have Apple Care there is no charge, otherwise it’s $79.

It can be done at Apple Stores in two hours or less. I also took along an Apple Battery Case that insured I could make it through the day. It’s still disappointing that Apple phones trade slimness for battery capacity. There does seem to be some slight recognition of this issue, with their latest phones offering about 15% more capacity, but still nowhere near the battery life of Samsung Galaxy phones.

Uber – A large Uber sign greets arriving passengers at the Porto Airport. Uber has a large presence and we used it extensively. It worked well – as long as I had fast data service on my phone.  We also used regular taxi cabs that were a cut above Uber, particularly in the quality of the vehicles. I really wish that taxi companies would adopt an Uber-like app to provide the same convenience. The ability to enter your destination and pay with your credit card is particularly useful in a foreign country.

Headphones – One of the most useful products for air travel are noise reduction headphones, and they’re getting better. There are many models that match Bose, many for less than $200. With the addition of advanced Bluetooth, they’re even more convenient to use for listening to audiobooks, podcasts and, in its wired mode, for in-flight entertainment. I’ve reviewed many of the new high-end models ($399 to $500) from Sony, Bose and others, and among them all, I prefer the latest version of the Bang & Olufsen H9. Its audio quality is the best among the group and its compact size and superb build quality means you don’t need a bulky case for traveling – just use the supplied cloth bag.  Most of all, they were really comfortable on the 13-hour return flight, and the long battery life was barely impacted.

Cameras – With the improved cameras in phones, many no longer travel with a separate camera. But if you still want to capture the best possible images and have more creativity to zoom and adjust exposure you need a separate camera. I’ve been using a Sony Alpha 7 III mirrorless camera with a Sony 24-105 f4 zoom lens. Both the camera and lens are very compact and are much lighter than a comparable DSLR. More importantly, the images are some of the best I’ve ever taken for sharpness, color and exposure. It can even detect and focus on the eyes of your subject. Highly recommended.

In Italy AppTaxi works well for calling a taxi and paying for it. I have also used an App called Bolt (formerly Taxify) that says it works in 25 countries, and that five cities in Portugal. With Bolt it’s not clear that they are always taxis, they may be getting into the Uber game in some places, I’m not sure. In cities where it’s available, I love Car2Go, car rental by the minute (or hour or day). The map shows you nearby cars and you can reserve one for 20 minutes while you walk to it. Then you can use it for whatever time you need, even five minutes. Includes a good TomTom GPS and multi-language support. Where I am now in Florence Italy, you can drive the Car2Go in the “ZTL” limited traffic areas in the heart of the city, and you can park it in resident parking spaces. That’s the one catch — sometimes you end up driving around for five or ten minutes looking for a legal space to leave it (and you are paying for those minutes).

On the phone front, T-mobile now lets you buy higher speed data, 15GB good for a month for $50, which includes international phone calls as well (no 20 cents/minute). There is a shorter plan for less as well. And with recent Apple iPhones that support “E-sim” you can put your primary carrier on the E-sim (I did with T-mobile remotely over the phone from Italy) and then put a local SIM in the slot. You can choose which data to use, and when you make calls you can choose which line (and set in your address book defaults for each contact). I think it probably has an impact on battery life, since it’s constantly having to check in with both carriers for texts and stuff, but I’m still lasting the day with my iPhone XS.