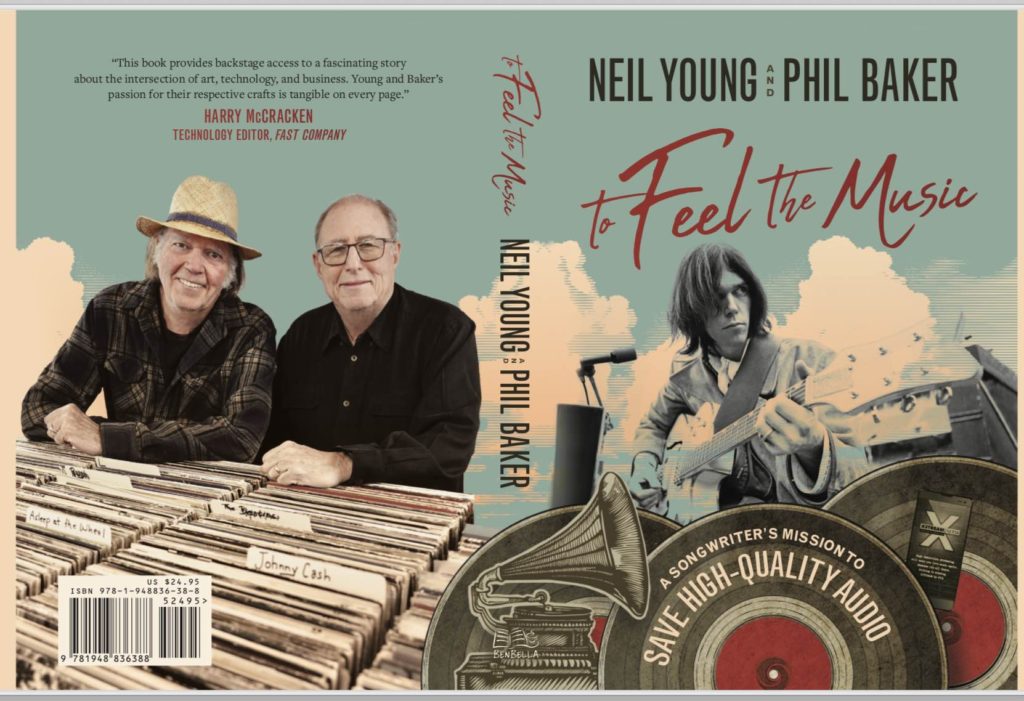 “To Feel the Music” is on sale this week, and I wanted to provide a little background on the book.

When Neil and I decided to write the book, To Feel the Music, there were several objectives we each had. For Neil it was to save music, and the book provided a chance to explain his efforts in another way in more detail. He wanted to convey once more how badly audio quality had deteriorated over the years due to the neglect and overt actions of the recording companies and technology companies.

With no support for high quality audio by the industry, historical recordings on tape were languishing in vaults, deteriorating over time, never being transferred to high quality digital files and being lost to future generations. And new generations of music fans never experienced how good music could be, because everything they heard was highly compressed. In fact, while finishing up the book, revelations surfaced about a massive fire that destroyed historical recordings of Universal artists.

One of my objectives, as a technologist and writer, was to chronicle the damage being done and Neil’s efforts to respond through his own initiatives. I also wanted to address the critics and naysayers that questioned his cause and his motivations, just because he was a well-known personality.

Because I was in the room, I saw how passionate Neil was and experienced for myself how technology had failed. If I, as a technologist, was unaware, why would others be expected to know? I also saw a side of Neil the public never sees, his grasp of technology and ability to use it to invent solutions, and his role as a CEO of a start-up company. That was a great story in itself.

A good backdrop to the story was the highly visible effort to develop the Pono music player, the first implementation of Neil’s efforts to provide better audio to music lovers. While a technical success, it was a commercial failure, due in part to the advent of streaming, but also a result of business mistakes. I saw how Neil was undeterred and how it challenged him to implement his streaming solution. He never hesitated, never doubted his mission, and just kept moving from one solution to the next.

I also was inspired to tell the story of the Pono product development, a behind the scenes look into developing a product, something that’s rarely seen. I took inspiration from the classic book I loved, “The Soul of a New Machine,” by Tracy Kidder, who wrote a classic about the development of the minicomputer. The idea was the easiest part, while there are so may ways to get derailed from both internal and external events.

I also wanted to reveal the hypocrisy about some in the technology press and how poorly they serve their readers. There’s an increasing number with no integrity and writing click-bait stories, rather than following good journalistic practices.

But perhaps the biggest objective we both had was to explain to the public as completely and accurately as possible what they are missing from the music they listen to and how these issues can be easily solved, if only there was some willingness on the part of the industry to do so.

The good news is that I do expect high res streaming to be widely available within the next year or so from one or more major industry players.  And I’m proud, as I know Neil is, to have played a part in making that happen.