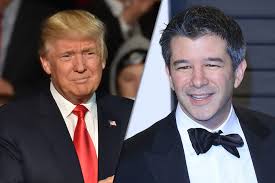 A vast majority of those in our community can’t tolerate President Trump for his incompetency, his narcissism and his nastiness. As bad as he is, we fault many of his party’s members in Congress for tolerating him, for ignoring his outbursts and for conducting business as usual.

We appeal to these members in Congress to speak out and to stand up for what’s moral, to do the right thing in the face of outlandish behavior. We appeal to them not to be complicit with such bad behavior. And we are frustrated when they just treat him as normal and fail to criticize.

What we are seeing is that otherwise decent people will compromise on taking a clear moral position when it benefits them not to do so, even when there is overwhelming evidence to the contrary.

I see the same thing happening at Uber.  For the past several years there’s been ample evidence that it’s founder and former CEO, Travis Kalanick, has been guilty of moral failings, including breaking laws, the possible theft of trade secrets, encouraging sexual harassment, and most recently, breaking numerous state and federal laws by covering up massive data thefts of its customers and drivers, paying off hackers, and not reporting it.

Yet we rarely hear a peep from his board members, investors or executives, from those that should know better, with the exception of Benchmark that started and then halted a lawsuit against Kalanick.  Clearly nothing from Arianna Huffington, a board member that keeps defending him and someone you would think should know better based on her legacy.

Of course, while as bad as his actions are, they don’t have near the impact of Trump, but they show exactly the same behavior by those around him. Like the Republican members of Congress, Uber’s directors continue to allow Travanick to serve on the board as if nothing has happened, appoint new members, and rarely criticize him for his behavior. For the Republicans, it’s to get their agenda passed; for Uber’s boards, investors, and executives, it’s to get rich.

A professional analyst might suggest the similarities between Trump and Kalanick stem from some deep-seated insecurities.

In Kalanick’s case, perhaps the insecurity stems from the knowledge that the Uber business model is seriously flawed.  After all, he has said self-driving cars are an existential threat to its existence, months before being charged with stealing Google’s self-driving car technology.

Uber has a phenomenal product, but with some serious flaws. The product is being sold for less than what it costs in order to attract business. In most industries, this would not be sustainable. And while sustaining its huge losses, Uber severely compromises its product. Its model prevents doing adequate driver checks that increases the danger to its customers.

Most law enforcement agencies say fingerprinting is needed to prevent the hiring of criminals, and that was brought home this past week in Colorado. Regulators there discovered that Uber hired nearly 60 drivers with criminal records or serious motor vehicle offenses. They had felony convictions and were convicted of drunk and restless driving. The company is facing an $8.9 million fine. The findings occurred after an investigation into an assault on a passenger.

In spite of their new CEO promising transparency, do you think we’ll ever see safety statistics of its users? Will the next shoe to drop be a revelation of a high incidence of safety risk to its customers?

Let’s hope better minds will prevail in Congress and at Uber. We can’t afford to elevate and support jerks of any persuasion.