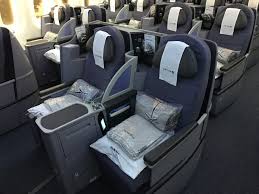 It’s not often that United beats one of the other major International airlines, but during a recent trip, my experiences on United bettered Qantas on many of the touch points. Of course, this is sample of one and not necessarily representative of anything other than one isolated trip.

I traveled between LAX to Melbourne on United’s Boeing Dreamliner using 80,000 business-saver miles, and back to LAX from Sydney three weeks later on a paid ($2017) Qantas Airbus A380, both  business class. In between we had a wonderful trip to New Zealand, which I’ll save for another column.

A day prior to the flight to Melbourne, it was easy to check in using the UA app, view, and change my seat assignments.The airline provided plenty of reminders before flight time regarding gate and boarding time. That was in stark contrast to Qantas’ buggy app and website that I’ll get to later.

We arrived early for the flight and discovered United’s new Polaris LAX airport lounge, but in spite of receiving those numerous flight updates, the lounge and its extensive food offerings was a secret. Maybe that explains why it was so empty. Had we been aware we wouldn’t have stopped for dinner on the way. The lounge even had sit down service with waiters offering choices from a large menu.

United’s flight 98 left right on time and the seating in this Polaris configuration was superb. The compartment-like business seat is well designed, comfortable and had plenty of storage spots for a bag, shoes, and other miscellaneous items. The plugs for charging were conveniently located over my shoulder. While some report the noise level is high on this aircraft, I used a pair of Bang & Olufsen H9i ANC headphones and didn’t notice.

The UA flight arrived early into Melbourne Airport and customs clearance was quick and easy. The one problem with Melbourne airport is no one could tell me where to get my Uber. I think the taxi dispatcher purposely sent me to the wrong area!

I returned to LAX via a connecting flight from Wellington, NZ to Sydney. The reservation was made through Expedia to get a terrific price ($2100 one way). I had a 90-minute connection that Qantas confirmed was plenty of time and perfectly legal.

Twenty-four hours before flight time I tried to check in on the Qantas website as well as on the app, but both were full of problems, both technical and confusing user interfaces. Qantas had not assigned seats for our Sydney to LAX leg, so I tried doing that on-line. As expected, it required us to enter a load of personal information including passports, birthday, etc. before allowing us to select seats. But when we clicked on “select seats,” we got a spinner that eventually returned a message. “Problem assigning seats, try again.” We clicked on the try again box and some of the information we had filled in now had to be filled in all over again. We never were able to retrieve either boarding passes nor select our seats.

The morning before leaving for the airport I checked the app, and surprisingly the boarding passes showed up with my wife and my seats assigned a row apart and across the aisle. It was not possible to change the seats.

But there was a lot of anxiety on the first leg of the return flight out of Wellington. Boarding time came and went, and fifteen minutes later, the gate agent made an announcement that there would be a further delay.  Apparently there were two issues: the pilot was late and then another delay resulted from the entertainment system not working. Many of the passengers were on connecting flights and asked the agent if we could vote to leave without further delay and forsake the in-flight movies. Perhaps, the pilot got the message; we took off about 50 minutes late with no entertainment system.

Before we left, the gate agent said that we’d have plenty of time and we’d be met by an agent in Sydney to escort the connecting passengers to the next gate. But once we landed, parked at a remote gate, and got bussed to the International terminal, there was no one waiting for us. We had 20 minutes to run quite a distance across the terminal to the our gate. Along the way we encountered a tortuous path through a duty-free store, poor gate markings, and another security screening.

Fortunately, we made it to the gate about five minutes before the flight’s scheduled departure and joined the line that was just completing boarding about 15 minutes behind schedule.

Business class is on the upper level of the A380 and provided plenty of space and good comfort. But the design of the seats were not as space efficient as the United Dreamliner, with the seats lined up one next to the other and had a design reminiscent of older generation planes.

Service and food on both airlines were similar – nothing exceptional – but the Qantus entertainment system was a little more dated. UA offered WiFi over the ocean (from Panasonic), while Qantas had no WiFi.

In reality, it’s hard to complain about either airline, but the United experience overall was more enjoyable, perhaps in part because of no connection. The seats were more comfortable, it had more modern amenities, and a much better on-line experience. We’re used to reading reports of just the opposite, where United provides poor communications, is late, and provides worse service than its international competitors, so maybe this really is newsworthy.