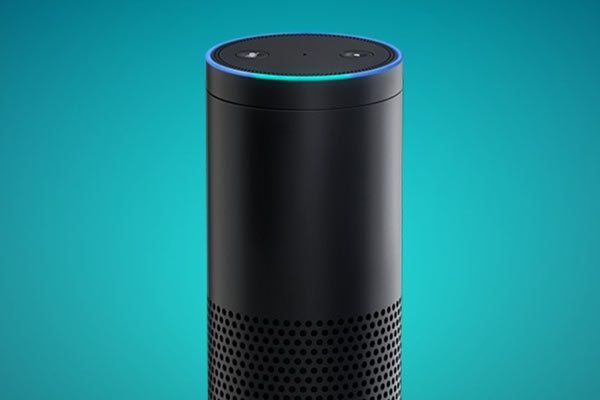 I’ve been trying out two products that perform completely different functions yet have many similar elements. They represent the new wave of products called the Internet of Things, devices that use a wireless connection to the cloud to provide services in the home.

Echo is a clever product developed by Amazon that falls into the category of “I didn’t know I needed it until I heard about it.” It’s a black cylinder, 3¼ inches in diameter by 9¼ inches tall that sits anywhere on a counter, desk or table, and responds to voice commands. Think of it as a stand-alone Siri-like device. Address it by name, Alexa, and it lights up ready to respond to your command.

Echo is easy to install. Simply plug it in and download the Android or iPhone app, which will take you through the connection steps. Yes, it’s similar to Siri, but it can do more.

For example, request it to play a specific radio station or stream music from your favorite artist. Just say “Alexa, play radio station KGO 810.” You can ask it to create a shopping or to-do list and add items to them at any time.

Like Siri, you can ask for a weather forecast, the time, or your location. Unlike Siri, it can’t dial a phone number since it’s not part of a phone.

You can ask it for directions or traffic conditions, much like an audio version of Google search. You can even ask it for the news, a baseball score or dozens of other things. The app maintains a log of what you’ve asked for and displays the lists you’ve created on its accompanying app for iOS or Android.

The hardware is well done. It’s a solidly built cylinder with a futuristic lighted ring around the top that shows it’s listening, and also turns to adjust the volume. It has several direction-sensitive microphones that can hear a command from an adjacent room easily.

And it has a powerful built-in speaker that’s great for speech, although not that great for music.

Echo has the potential to do even more as its software is upgraded. For example, it could turn on lights, set an alarm or detect an intrusion; or order products from Amazon, as many had conjectured. Much like Google’s acquisition of the Nest Thermostat and Dropcam cameras, Echo could be the beginnings of a hub to manage a variety of services throughout your home, as well as potentially more onerous activities.

The Echo sells for $180 from Amazon, and while it’s not yet a must-have, it’s certainly one of the most fun devices out there that is useful and has the potential to do more.

Several companies are trying to redefine home security systems by replacing all of the window and door sensors with a motion-detecting camera, which provides alerts to your smartphone rather than to an expensive monitoring service.

Canary is one of those products, and I’ve been trying it out for a month. It’s a small cylinder that sits on a counter or mounts on a wall; it contains a 1080p night-vision video camera with a wide-angle lens. It’s able to detect motion, then alert you with a text message, and let you see what’s going on using an app on your iPhone or Android phone.

You can view what the camera sees, and pan and enlarge it up to three times. Canary also contains a loud siren you can activate from your phone, ostensibly to surprise an intruder. It works by connecting to your home Wi-Fi and stores video on the company’s cloud once it detects motion.

Canary also measures temperature, humidity and air quality. You can watch video live or go back and view later should it detect questionable activity.

Canary is designed to learn the patterns and identify normal activity, such as your dog or a family member, to avoid alerting you too frequently. The device is designed to use these patterns to know when you’re away so it can activate the monitoring or go to an unarmed state when you are home.

The learning feature did not learn so well though, as I continued to get alerts several times a day when my wife was at home.

The product has evolved over the past several months with frequent updates to its apps, based on user reviews. Issues have included too many alerts, a lack of learning and failing to rest after a power outage.

I liked the product. The camera is excellent and Canary accurately detected motion.

However, it’s not a substitute for a conventional alarm system that monitors windows and doors, because Canary only detects an intruder after he or she has entered your home.

But it’s a good supplement and useful for monitoring your home or apartment when you are away. We sure could have used this when we lived in Massachusetts and a pipe froze while we were on vacation and flooded the whole house.

Canary costs $249. The company provides limited free access to your recorded video and has several monthly plans to store additional footage on the cloud for a longer period of time. (www.canary.is)