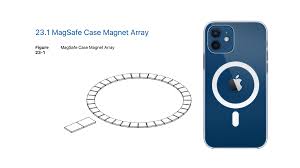 This is the 14th anniversary of the iPhone, a product that has had more impact on the consumer than most any other product in the last three decades. Who would have imagined a device with so much impact? But the brilliant engineers that work on successive generations of the iPhones must be far removed from those engineers working on the iPhone’s and other accessories. Over the years their accessories have been often ill-conceived, and most always overpriced. In addition, many are difficult to use and not well thought out.

Apple has always strived to make a killing on its accessories.  With the advantage over their competitors – knowing the details of the next series of iPhones – they always have a head start to get to market first and charge accordingly.

Apple’s latest example of this is MagSafe, a feature of its iPhone 12 series that has led to a number of accessories that use this technology. It’s not to be confused with the MagSafe found on older MacBooks.  The phones and cases each have a built in ring of very thin magnets on their back surface that helps position the phone on a MagSage-enabled induction charger with its own complementary ring of magnets. The two devices are able to now attract and self-align. While the phone has the magnet ring built-in, it doesn’t work through a case, so case manufacturer have added it to their products and call them MagSafe cases.

These MagSafe cases are available from Apple in silicone ($40) and leather ($60) version. But in reality, these rings are not needed for induction charging; they just help you more accurately position the phone – a nice to have. It’s now also found on third party cases, as this one from Smartish. Smartish makes a variety of MagSafe cases for $20 that are less than half the cost of nearly identical to the third party cases sold in Apple stores. Numerous other brands offer similar cases, as well. (Smartish sent me a few cases to try.) It’s also possible to  turn most any case into a MagSafe case by sticking one of these rings on the case.

Another implementation of MagSafe is a small charging pad from Apple called the “MagSafe Duo Charger” that has two charging areas for your phone and watch. It’s made of cheap looking white vinyl and costs a whopping $129, not including the charger needed to power it.

The MagSafe feature also is being used by some 3rd party companies for mounting your phone in your car or on a desk stand. A number of companies now make car mounts with a MagSafe magnet array that attracts the magnets in the case or phone.  Some also have a charger built in. Based on trying several, the magnetic strength is not as good as a convention magnetic mount such as the clever mounting system from Nite-Ize. While MagSafe works well for aligning the phone on a charger, it’s only so-so for a car mount.

The other issue with the MagSafe is that it doesn’t work on some of the more robust and versatile cases, especially cases with a built in credit card compartment or an integral wallet. To get around this limitation Apple offers an accessory for its accessory cases, a snap-on wallet, but it’s also overpriced at $50 for a simple leather sleeve that holds two or three cards.

The issue around accessories extends well beyond cellphones. Recently Apple introduced their Air Tags, a small round electronic device about the size of a couple of stacked quarters designed to be attached to a personal item to help you locate it, if it becomes lost. It’s clever and useful, much like existing products, such as the Tile.

But Apple never put a small hole in the $30 Air Tag that would allow you to attach it to a keychain or your luggage. Instead, they offer a $40 leather case that holds the AirTag and has an attachment point. Another high priced accessory for an accessory.Apple claims they have respect for their customers, but, clearly, this is an example of extracting as much as they can, all for the lack of a tiny hole.

Finally, ever wonder why Apple Lightning cables cost more than other charging cables?  Apple requires a tiny chip to be included in the cable head, and for it to be bought from one of its approved suppliers, adding several dollars to the cable price. If you use an unapproved cable, the phone gives you a warning.

While Apple does a great job in creating its iconic iPhones – some would say better than most anyone – they make a confusing mess of its accessories. They’re frequently over-priced gimmicks that are a clear ploy to take advantage of Apple fans that will buy most anything with an Apple logo.