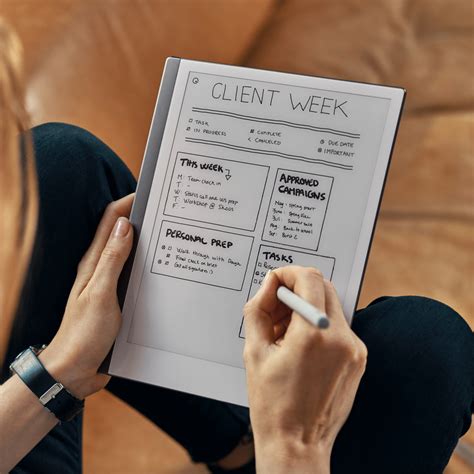 For years, technology companies have tried to come up with a product for electronic notetaking to replace paper and pen. The benefit, proponents say, is you could digitize handwritten notes and sketches, convert them to text, store them on line, and share with others. Digital note taking also allows more flexibility using different templates, pen and brush types and colors.

The Apple Newton, introduced exactly thirty years ago this week tried it. It was designed to be a handheld version of a paper notepad with a stylus to write your notes. It failed. The iPad was intended to do much the same. Scores of apps became available that let you create notes, notebooks full of notes, then convert them to text and add notations using a stylus. The iPad still can’t came very close to replicate paper and pen. Writing with a stylus on an iPad is less satisfying than using pad and paper. The feel of the stylus skidding over the slick glass screen feels nothing like paper. The digital ink that is created is often course, imprecise, and off-putting with parallax between the pen tip and the digital ink.

Paper and pen are still hard to beat. A paper notebook lets you isolate and do your thinking while jotting down your notes with no pop-ups, no diversions, and no batteries. I often carry a paper notebook with me to take notes or jot down ideas that come to mind. And I can select any type of pen or pencil that meets my needs.

Still, companies keep trying to replace paper and pen. The latest is a product called the reMarkable 2. It’s a very thin and lightweight 10-inch tablet about half the thickness of a smartphone and much thinner and lighter than an iPad. The surface looks like paper without any glosss, and the stylus feels like you’re writing on paper. The product uses e-Ink technology, similar to what’s used for eBook readers such as the Kindle, but it’s higher resolution than most e-readers and not backlit. The tablet is built on an aluminum frame so it’s very rigid, precise, and light. The front face is nearly all screen with no diversions. A simple menu runs along the left side and top. A single button at top left turns it on instantly and the battery lasts over a week. The stylus – that requires no battery – magnetically attaches to the right side of the device. A leather cover is available to encase the device. Taken together it looks like a high-end futuristic executive notebook.

When I first received it and turned it on I was startled when I looked at the screen. It was clean, text was precise and it had a pale green matte finish. I scribbled a bit and it looked very close to writing on paper with a thin dark pen (or a wide soft pencil, or many other options). When I used the stylus to try the different pen widths, it also felt just as if I was writing on a pad of paper with just the right amount of friction. It’ safe to say that the reMarkable comes closer to replacing pen and paper than anything I’ve ever tried.

The challenge now for a product like this is determing what to put in and what to leave out. You don’t want to create a compeitor to a tablet because it can never come close with its black and white text, a slower refresh rate, and an all new operating system. The company has smartly positioned it as a replacement for pen and paper that we would want to use to take notes, brainstorm, make lists, all without interuptions.

The other major feature is the ability to send PDF documents to the device, sign them, mark them up, and then send them on. I’ve used this mode frequently and it works well. Simply annote the document and email it to another address using its built-in WiFi.

The product performs these two function remarkably well. In the two weeks I’ve had it, I’ve created sketches, marked up PDFs, annotated images with notes and read long PDF documents on this instead of my computer. I’ve allso downloaded PDF documents, including a camera user guide and some fee ebooks and it worked well, although you don’t have the wide flexibility of changing font type and size as you do on an ereader. And formating can sometimes be a bit off.

The company has created a simple interface that uses mostly symbols for worlwide compatibility. Documents can be saved in folders and notebooks and by PDFs. The product costs $299 plus either $79 or $129 for the stylus (the costlier one has an electronic eraser on its top). A portfolio/cover costs $129 in cloth and $169 in leather. They offer a 100 day trial of the product. There’s a monthly subscription that varies from free to $8/month that offers unlimited cloud storage, handwriting conversion to text, and integration with Google Drive and Dropbox.

The company, reMarkable, is located in Norway and has recently sold its one-millionth tablet over the past five years. I found the product to be a great compliment to the notebook and phone I carry. I don’t use an iPad because it’s too redundant for me and more complex than my notebook for productivity projects. The reMarkable is able to let me jot notes in a meeting, on a plane or most anyway, spontaneously and more easily than I can do with my other devices. If note-taking is something important to, there’s nothing that comes close – except maybe paper and pen. Which is what’s intended.