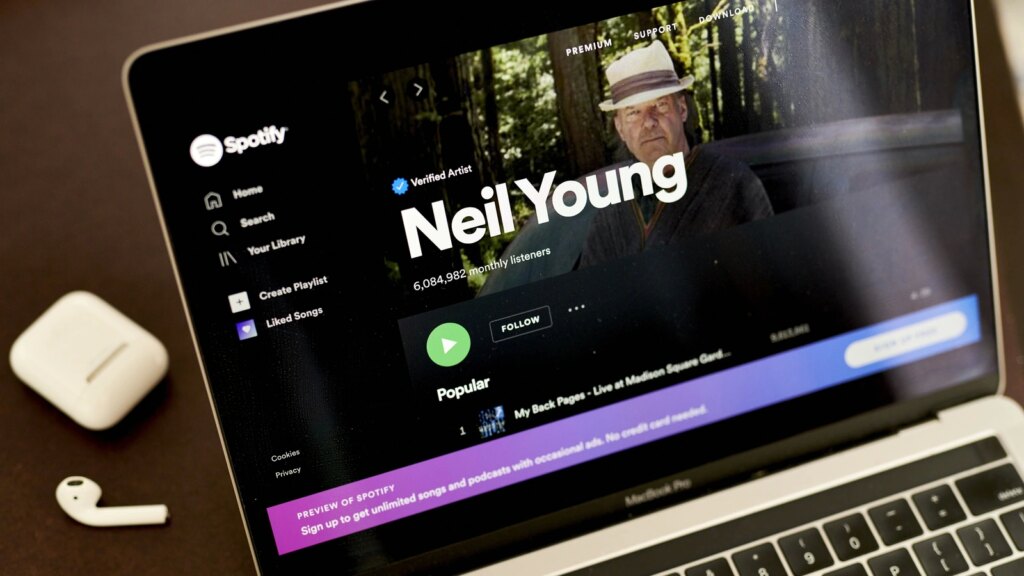 Even before this past week’s events, I never considered using Spotify to listen to music. Spotify streams at the lowest audio quality among all its competitors. How low? About 1/20th the quality of streaming services such as Amazon, Apple and Qobuz.

Just a couple of years ago Amazon, Apple and Spotify were all of similar quality – basically AM radio level. But in late 2020 and 2021 Amazon and Apple upgraded their audio quality to hi-res (192/24), equalling Qobuz, the small French company that pioneered hi-res streaming music. Qobuz then cut their subscription costs, so there are now three excellent services to select from in the $10-$15 per month range.

(Note that not all recordings are available in hi-res; many were originally recorded in CD quality or even worse. But these services provide the best available for the recordings offered.)

Just prior to Amazon Music introducing hi-res, Neil Young and I wrote the book, “To Feel the Music,” to explain why so many music fans were being deprived of quality sound. We urged the major streaming services to go to lossless audio- music with no compression. We wrote the book because we were frustrated that all the streaming music companies failed to improve their services, even as wireless data speeds improved and costs plummeted. We urged one of the big companies to go hi-res, and it was Amazon Music that did first.

Instead of investing in better music quality, Spotify decided to expand in a different direction, to start a podcast service, and investe in podcasters that had a large following. They paid Joe Rogan $100 million to broadcast exclusively for them, and then failed to accept responsibility for the content of his podcasts. Podcasts are editorial content and Spotify became a publisher by employing and promoting Rogan. That’s different from their music business and different from other podcast aggregators such as Apple that has no exclusivity, nor has the podcaster working for them.

When Rogan focused many of his episodes on vaccination deniers and medical quackery, it made for big audiences, but also disseminated false and deadly information. Rogan claimed to offer “both sides” of the issue, but defined the two sides as scientific data and medical professionals on one side and conspiracy theorists and quackpots on the other. Many of his shows were designed to stir up controversy and outrage. On several occasions he even had Alex Jones on his show. Jones claimed the Sandy Hook shooting was a hoax, and was sued and lost for defamation.

A couple of weeks ago a few hundred doctors and other medical professionals sent a letter to Spotify, asking for the false information to stop and be corrected. Many of their patients failed to get vaccinated because they heard Rogan and his guests recommending against it, one guest even claiming those being vaccinated were being hypnotized or having microchips implanted in them. Rogan was having an outside influence in perpetuating falsehoods about the risks of vaccines, leading to actual deaths.

Neil learned about the letter and immediately asked his label (Warner Music) to remove his music from Spotify in support of those medical professionals that signed the letter, and his label supported his request. It was an immediate reaction to the letter and to provide moral support to the frontline medical professionals that were treating the huge influx of Covid patients. His beef was with Spotify, not Joe Rogan. He was not trying to censor Rogan, but making it clear that he did not want to share the same platform, exercising his right of free expression, and writing this on his website:

“I support free speech. I have never been in favor of censorship. Private companies have the right to choose what they profit from, just as I can choose not to have my music support a platform that disseminates harmful information. I am happy and proud to stand in solidarity with the front line health care workers who risk their lives every day to help others.”

This one act of just doing the right thing at personal expense has resonated around the world, much more than anyone expected. It’s one of the finest acts of moral courage that a person can make, and was widely acclaimed, such as this from Variety:

“Neil Young, in his own cantankerous and occasionally confounding way, still has a heart of gold, and a steely backbone to go with it. That this latest standoff will result in him being remembered by younger generations as a hero is one happy outcome of a story that’s otherwise far from resolved. Rogan’s inevitable, reasonable-sounding “If anyone was offended…” speech cooled off the anxious stock market, but it won’t take the microscope off how companies deal with dangerous misinformation going forward. Because even with all the intricacies involved, it’s not hard to decide between Young, the concerned “Old Man” still raising his voice, and Ivermectin Man, the gaslighter who says he only provides a platform for multiple viewpoints, then asserts that fellow conspiracy junkie Alex Jones is “right 80% of the time.”

This column by Tom Friedman puts a much bigger context on what Young did, comparing him to, of all people, Liz Cheney.

How will this all end? Hopefully a recognition from Spotify that it must do more to insure it is not a party to spreading false information that can lead to illness and death. And an example of how one person can make a huge difference in making this world a better place.

But, let’s not forget those individuals the wrote the original letter. They are real heroes.