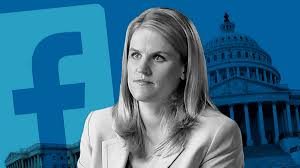 Facebook is on the defensive once again with new revelations backed up by Facebook’s own documents. Will this time be different? Past revelations, no matter how outrageous, elicited responses much like we see now: Lawmakers express outrage, call for new laws and new hearings, and threaten Facebook. But then nothing happens.

Yes, I do think this time will be different.  Facebook continues to be hugely successful, but there’s a rot beginning to take hold inside the company. Employees are questioning their leaders, engagement of Facebook products in the US has slowed, and they’re losing engagement with the under 30 group. Kevin Roose of the NY Times, says their best times are behind them, and the company is weaker than many think.

In this week’s testimony before the Senate, a former Facebook product manager, Frances Haugen, provided details that only an insider could know. She revealed them in the Wall St Journal, 60 Minutes and now to a Senate committee. They were not just her opinions, but Facebook-generated research documents that describe the harm Facebook is doing because of its decision to deliver content to its users based on its algorithm that decides how to amplify each post. The stories that engaged the most were often the ones that had the most serious consequences. For example, Facebook’s own research showed how such their algorithm creates suicidal thoughts among teen women, driving them to sites that public shame and even sites that encourage eating disorders. Other users, exhibiting a prejudice, are driven to extremist groups and encouraged to join. We learned how Mark Zuckerberg insists on manipulating the algorithm to maximize revenue at a cost to user safety. These files from Haugen contradict Facebook’s messaging over the years and offered clear proof that they have lied numerous times to Congress, their shareholders, and the public.

Facebook’s CEO, Mark Zuckerberg, is the person responsible and his reputation continues to erode; he will be subpoenaed to testify once more before Congress. Facebook’s COO, Sheryl Sandberg, once a highly visible executive at Google and author of the book “Lean In,” has been noticeably silent and invisible.

There is likely to be more inside information coming out from other disgruntled employees. Reporters, Congressmen, and investigators have established confidential ways for employees to contact them. We do know that many employees are upset with the way their management has behaved. They see Haugen being praised for her bravery and that may encourage others to talk.

Haugen had a clear and understandable message: It was Facebook’s decision and eagerness to tweak their algorithms to increase engagement over safety. This is different than previous hearings that got bogged down in technical details and failed to make much of an impact.  In part, her testimony was educating our Congress on one key Facebook transgression that went to the heart of the matter and was accompanied by a simple fix: change the algorithm. The simplicity of the message is generating a wave of press stories, moving from the tech section to the front pages. Even Senators were able to understand and avoided making fools of themselves!

Haugen insisted she didn’t want to see Facebook broken up because it offers benefits to many. Her recommendations were to fix Facebook to make it better.

There’s now bipartisan support to continue hearings and enact laws. There will be hearings across Congress and the EU, and the SEC is looking into violations of security laws based on Facebook not being truthful to its shareholders. Facebook has never before been under so much scrutiny by so many.

There are even some things that can be done if Facebook and Congress do nothing. Apple provides an option to opt out of being tracked and 75% of Facebook users are opting out. Amy Klobucher, Senator from Minnesota is urging that be extended to Android users.

Normally, a company will try to discredit a whistleblower, but that will be difficult with Haugen. She’s articulate, intelligent, and has endeared a lot of support. Because she has Facebook’s own documents, it’s not a question of her opinion that can be discredited. But that doesn’t mean Facebook won’t try. They’ve already made some feeble attacks that reflect more on Facebook and its PR hacks. (Haugen is operating under the Whistleblower law that allows an employee to share company documents with the SEC.)

Over the years Facebook has been their own worst enemy. They have been arrogant, callous, inept, and just lie. Whatever they say now will be taken with even more skepticism. It will be much harder to fight back. The sense of outrage is growing.  Their arrogance is going to make them even more despised, especially as more people read about these horrors that relate to their daughters, not just to events in other countries

But this will be no easy fight. Facebook has infinite dollars and thousands of lobbyists that will be fighting against making any significant changes.  But I’m convinced Facebook has met their match and the tide is turning.