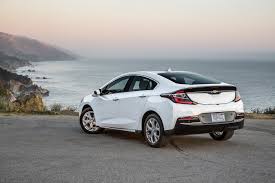 Thomas J. Thias is a Chevy sales person with Sundance Chevrolet  in Grand Ledge, Michigan, and is passionate about the Chevy Volt. I met him on line while researching my purchase of a new car. I want to introduce him to my readers, because he’s a great resource for those considering purchasing an electric or hybrid car. He’s passionate, smart, highly informed, and a walking encyclopedia of useful facts.

Here is his story. in his own words:

My passion for modern era Electric Fueled Vehicle’s began in earnest with the lead up to the 2007 North American International Auto Show as numerous reports published that General Motors was getting back into the EV business after the EV1 had been terminated 10 years earlier. The $4.00 gas for most of 2008, when our country and the world were suffering the greatest recession since the Great Depression swore me off fossil fuel fuels forever. That’s the same year that the website GM-Volt dot com was started by Dr. Lyle Dennis.

It wasn’t until July 2011 that I joined up as regular contributor and my official introduction to the world of the Amazing Chevy Volt Extended Range Electric Vehicle was published on November 17th, 2011. It was this November of 2011 that Chevy Volt and Nissan LEAF both ended limited distribution ( Volt, Just 6 states and the District of Columbia from December, 2010 through July 31, 2011), a beta test as it were and National Sales began.

Since then, I have published comments and blogs at GM-Volt over 1,125 times.

I have been in the car business, retail sales & leasing since July of 1984.  I have been at Sundance Chevrolet  in Grand Ledge, Michigan since November of 1988.

From February, 2011 we have sold/leased over 85 Chevy Volts and I have gone in of over 70 as the Chevy Volt Expert.

Personally I have sold/leased 18 of them.  My mission has always to educate the staff here and to help them feel comfortable with presenting the product.

To a large extent this has failed and I will explain this below.

The Auto Dealers are not too enthused at promoting these products and here is why.

The Electric Fueled Vehicle’s in general need none of these things.  Even with my first Chevy Volt, a three year leased MY 2012 at 15,000 miles a year, I  did NOT have my first oil change till 30,000 miles out,  after 2 years into ownership. Now multiply this by hundreds of thousands of product!

So, I turned to Cyber Space to promote these vehicles.

A Google Introduction to me, a Cyber Business Card, as I call it can be fond here:

The California Air Resources Board, after maxing out their 85,000 Green PZEV Commuter Lane stickers has opened the program back up with an UNLIMITED ALLOCATION STIPULATION!

This is great news!

In one of the stunning developments in the history of the north American Automotive Industry, second hand Chevy Volts, Nissan LEAF and Ford Focus EV’s can be purchased at an extremely reasonable price if not downright cheep. Not a single automotive writer had disclosed the reason for this instead report that used Electric Fueled Vehicles are NOT holding their value.

This in fact a total crock. Never in automotive history has an OEM lowered the new MSRP pricing of its vehicles to such an extreme.

Now add the Federal Tax Credit of $7,500.00 that all Used Car Valuators depreciate these cars by and there are up to $17,000.00 of artificial Funny Money depreciation effecting the street values of the used U S based EV, EREV Fleet’s.

Here is my blog on the subject: