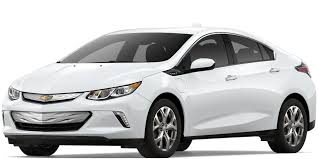 In 2011 GM introduced the Chevy Volt. Since then it has sold more than 150,000 units, not matching its potential, but still impressive.  The Volt’s benefits were never well-explained by the company, but it was a significant step towards the future of electric cars.

Hybrids, cars that use both battery and gas, have been synonymous with the Toyota Prius, followed by other models and brands. They all use both propulsion methods seamlessly and concurrently, but rarely one independent of the other.

Describing the Volt as a hybrid was an early mistake by GM. In fact, it’s a completely different type of car. It uses both battery and gas, but uses them independently. It allows you to travel only using the battery and then switches to gas when the battery is depleted. The advantage of this system is that if you travel within its battery range between charges, you never need to use gas. Yet, if you run out of battery range, you need not stop and charge it. You can travel indefinitely using gas, keep filling the tank, and never suffer from range anxiety. It has the best features of each.

The first generation could travel about 30 miles on a charge. The second could go about 55 miles. Those with a round trip commute to work of less than 30 or 55 miles would never need to buy gas. In fact, there are some Volt owners that claim they have never used gas. Adding to the confusion in recent years, GM named their all-electric car, “Bolt,” a name hard to tell apart.

Not only did Chevy fail to explain the car, it also did a bad job selling the car. Typical was the story from The Verge, where the writer describes his buying experience:

When my wife and I were planning to buy one, we started at our local Chevrolet dealer, which had several on the lot. When we arrived, the first thing our salesperson tried to do after we told him we wanted to test it out was… try to talk us out of it. Why deter us from buying a car we knew we wanted? This puzzled me for months, but eventually, I figured it out: for a salesperson (commissioned or not), time is money. He could tell us everything we needed to know about the Chevy Equinox or the Malibu in under 10 minutes. The Volt (and the Bolt EV, which launched later), are much more complicated to explain, taking up more time. And other than Tesla, which eschews the dealer model in favor of its own if-Apple-sold-cars-this-is-how-it-would-look retail stores, no carmaker has been able to crack the code on how to sell the damn things.

I’ve owned both generations as my primary car, leasing a 2014 for three years and currently driving a 2017. When I acquired the first model, it replaced a BMW X3 SUV and, as it turned out, I enjoyed the Volt much more. Its entertainment, navigation and display system was one of the best I had ever encountered. Many options on the BMW were standard on the lower cost Volt, such as keyless entry, folding rear seats, and other convenience features. And the Volt was almost 40% less expensive.

The 2017 was even better with its longer range and 40 mpg mileage when using gas, and an even better display system with Apple and Android phone integration. It was one of the first models to have adaptive cruise control, a feature that’s become a must for long driving. With rebates, the 2017 cost about $33,000.

Both cars have been trouble-free, much less so than the BMW and most of cars that I have owned. My 2017 lease is up this summer and I plan to buy the car. When I checked with my dealer about buying a new Volt, he said they were sold out quickly once GM announced that no more would be built.

In spite of GM failing to properly promote the Volt, they deserve credit for its incredible innovation. They were one of the first to demonstrate excellent American ingenuity and got me to buy my first American car in more than thirty years.

The new all-electric Chevy Bolt is also innovative and is having somewhat greater success. It’s easier to understand: 240 gas-free miles between charges for about $35,000, a similar range for what Tesla charges well over $50,000. While it’s not as slick and elegant as a Tesla, it’s mini-SUV design and roominess makes it a good successor to the Volt, a car that I, along with many industry analysts consider to be a major technical achievement.