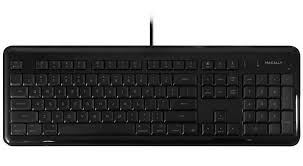 Let’s talk about computer keyboards, something that should be one of the most constants in our computing work, and a subject that you think would be settled by now. Keyboards are a basic necessity for writing, emailing and doing most everything we create on a computer. Computer companies got keyboards just about perfect decades ago, yet in recent times the engineers could not leave the design alone, particularly Apple.

In one of the dumbest moves ever, they began tinkering with the basic design and created a disaster on their recent lines of notebook computers. Keyboards with little travel, hard on the fingertips and, most notably, easily destroyed by a grain of sand, have replaced the tried and true designs we’ve gotten accustomed to.

There’s been plenty written already, and Apple now offers an extended warranty, while, in their usually arrogant manner, admits no fault.   But it’s really one of the most insane moves that has handicapped two generations of MacBooks, and if they fail to admit it and do nothing, could hamper models for years to come.

How did it happen? Engineers with too much time on their hands? An order from the head of design to make their computers thinner and thinner?  Or a CEO that has no hardware sensitivities and never noticed? Likely all of the above.

But t’s not just their notebook computer keyboards that are so bad. Their desktop keyboards are not particularly good either. That was something that hit home when a row of keys on my wife’s desktop keyboard for her iMac failed. I looked around for a replacement. Apple offers a wireless model for $100, but my wife disliked the keys on her current model, and asked me to find something like “keyboards used to be, with keys that actually moved.”

She also disliked Apple’s designs that require batteries to power the wireless Bluetooth. and asked, “Why do you need Bluetooth and batteries when the keyboard is 6 inches from the display?

I got two keyboards for her to try. An Amazon Basic keyboard for $13 and the Macally XKEYLED backlit USB wired keyboard for Mac that sells for $60. Both connect with USB.

My wife tried the Amazon for a week and then the Macally unit. Her verdict? Both provided a much superior typing experience to the Apple keyboard. Less typos, easier to type and a much more secure feeling.  And noticebly a much more green solution.

Both keyboards were good substitutes for the Apple, and would even consider them as upgrades to the Apple model, even though they were much less expensive. But over time my wife preferred the Macally because the keys had backlighting and had dedicated Mac keys, making it more difficult to use at night. The key action was slightly better, but not by much.

I’ve also been dealing with Apple’s keyboard issues. When I began an intensive writing project about 5 months ago I began using my compact 12-inch MacBook. But over time it became painful to type for hours at a time. I experienced missed letters, varying responses, and in the middle, my MacBook keyboard just failed. A replacement cost $700 because their keyboard is glued to most of  the rest of the computer and it all needs replacing. Fortunately it was covered under their warranty.

But I used that as an opportunity to look at Windows notebooks, as many have very capable and more conventional  keyboards. Would it be worthwhile to change computers, go from Mac to Windows over just a keyboard?  Five months later the answer is a resounding yes. I’m using a Lenovo Carbon X1 Thinkpad notebook and enjoying it, even though Windows 10 is not as good as MacOS. It reminded me when I selected a notebook computer over 20 years ago and bought a IBM Thinkpad for the keyboard. Somethings don’t change and shouldn’t change.

Apple’s failed experiement will have lasting damage, and for me it led to abandoning Mac computers for Windows solely because of the keyboard. Even now if I wanted to go back to the MacOS, it’s not possible; Apple doesn’t offer a notebook computer with a dependable and adequate keyboard.