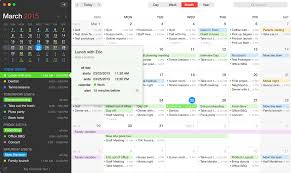 Flexibits today announced a massive update for Fantastical 2 for Mac. Version 2.2 adds many new powerful features to the Apple Design Award-winning OS X calendar app and is a free update for existing users. See my previous review of 2.0 on this site.

Some of the other new features in 2.2 include printing (with multiple, beautiful layouts), a second time zone time line (to let you quickly view other time zones), multiple selection (to move and delete multiple items at once), and the ability to start the week or month views on the current day or week.

“We launched Fantastical 2 for Mac one year ago, and our goal was to reinvent Fantastical itself,” said Michael Simmons, Co-founder of Flexibits. “Today’s update is the biggest we’ve ever shipped and we think our users are going to love it.”

Fantastical 2 for Mac’s natural language parsing engine is incredibly friendly and flexible. The parsing engine understands expressive repeating events such as third Thursday of every month, every weekend, last weekday of the month, and more. Users can even add alerts by ending their natural language input with phrases such as “remind me tomorrow at 3PM”, “alert 1 hour before”, or “alarm 3PM.”

Fantastical 2 for Mac users are able to quickly and easily create, view, and search all of their events and reminders. The advanced natural language engine is extremely expressive, enabling users to enter event or reminder details in their own style. For example, users can enter sentences such as “Lunch with John at 123 Main Street on Tuesday” and Fantastical 2 for Mac translates the sentence into an event and adds it to their calendar. And with support for reminders, users can enter sentences such as “todo Pick up dry cleaning on Friday” and the user will have a dated reminder, ready to check off when the time is right.

Fantastical 2 for Mac is fully localized in English, French, German, Italian, Japanese, and Spanish. Users can enter their events and reminders in their preferred language and Fantastical 2 will automagically detect the entered language, regardless of the system’s language setting. OS X Dictation makes it easy to quickly create events or reminders by speaking a sentence.

Fantastical 2.2 for Mac is available now for $49.99 (US) from Apple’s Mac App Store or directly from the Flexibits Store. Fantastical requires OS X Yosemite 10.10 or later. Current users can get the update for free via the Update tab in Apple’s Mac App Store or via the in app update if purchased directly from the Flexibits Store.