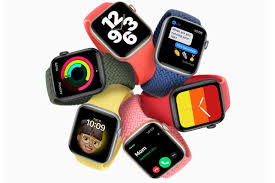 Apple has just introduced the latest version of their Apple watch. Called Series 6, it’s the continuing evolution of the original design that looks and works much the same. Yet over the years the watch has transitioned from a “what do I do with it?” to “it’s hard to get along without it.” The company has added new capabilities over the years – mostly minor, a few significant – but enough to provide a number of conveniences available at your fingertips.

What’s interesting is how different users find different benefits that are rarely the same. There’s no “killer app,” just a lot of different conveniences. To some it’s for health and fitness, others for safety or convenience, and for others it’s a great world time and travel watch that adjusts automatically to the local time.

While Apple carefully claims that the watch is not a medical device, this year’s unveil featured the tagline, “The future of health is on your wrist.”  There are now enough medical-like features that are beneficial and some that Apple has advertised as having actually saved a few lives. One of those is its ability to detect a fall and dial for help, much like the devices of old worn around the neck with the advertisement, “I fell down and can’t get up”. Another feature is heart monitoring with the ability to detect atrial fibrillation and to take a single-point ECG. But like most consumer devices it provides lots of data, but rarely provides context and advice, because that steps on FDA regulations.

I had an original Model 1 review unit from Apple over five years ago, and eventually gave it away. I found little use for it for at the time, and I preferred my collection of mechanical watches that included a Rolex, IWC, and  Patek.  But with my continued interest in new technology, I purchased a model 3 on sale for $240 a few years ago and found it to be much more useful. By that time it worked with more phone apps, not just Apple’s, and I found the calendar reminders, timers, and phone functions to be quite useful. I could answer or reject a call, read texts, time a cooking project, and see my schedule at a glance. When I used the GPS app on my phone, I’d get turn reminders with beeps on the watch.

Last year on one occasion it detected atrial fibrillation that caused me to visit my doctor. While it turned out to be a one-time anomaly, I used that as an excuse to purchase a Model 5 that added the ECG function. A cardiologist friend looked into the medical research being done on the watch and found some positive reviews of its capabilities.

I’m still wearing that model and with it’s slightly larger display, I can access ten or twelve functions at once from the display, including time, date, texts, email, appointments, and more  One major improvement from the first model is the always-on display. No need to shake your wrist to turn it on.

The latest Version 6 adds an oxygen detector that measures oxygen saturation, considered an early indicator of the Corona virus. But Apple discourages that, and for good reason: early reviews indicate it’s much less accurate than a $30 device that can read your fingertip.

Other features added over the years include exercise detection and tracking, waterproofing, GPS, step-counting, altimeter, a variety of new faces, faster charging, and better batteries. The latest WatchOS that works with several of the recent generations, adds sleep monitoring and hand-washing detection that turns on a timer and encourages you to scrub for 20 seconds.

Today there are models starting at less than $200, going all the way to over $1000, depending on the generation, case material, crystal, and band. Every model in each series is similar in appearance and function. The new Series 6 starts at $399, while the older Series 3 without ECG continues to be available from $199. Another new model without ECG, the Series SE, costs $279. The best buy today is a Series 5 refurbished from Apple that starts at $379. That givers you everything except the oxygen saturation measurement.

The entry prices are for aluminum cases and simple silicone straps. Models with a stainless steel case, a synthetic sapphire crystal, and a fancier band can double or triple the price, yet all perform much the same. You can also add cellular capability and pay your provider $10 per month to make and receive calls on the watch when you leave your iPhone at home. If the watch is nearby you have much the same functionality without paying for cellular service. For most it’s not worthwhile.

An iPhone is required to use the watch for most of its functions. For Android users, you’ll need to find another solution, such as a Samsung watch or a Fitbit device.

Apple has done a great job to evolve a product that began with many questioning its usefulness, to where it now outsells all the watches made in Switzerland by several times over. It’s an example of sticking with an idea and making incremental improvements to where it’s now quite a useful product. But, my advice is you can save a hundred dollars or more by buying last year’s model that’s essentially identical.