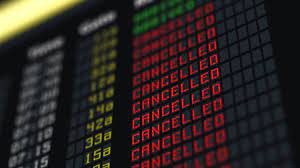 I’m not surprised by the trouble Southwest is going through. As a long time customer, I’ve seen a deterioration on many fronts over the last few years and reported my observations here, here, and here. While the terrible weather was a factor in the airline’s recent meltdown, it wasn’t the major factor.

What we’re seeing with Southwest is a sympton of a once well-run company that’s been terribly mismanaged. None of the other airlines came close to cancelling the percentage of flights ithat Southwest did. This is a Southwest problem. Don’t let their CEO, Bob Jordon, blame this on the weather, on safety or on anything apart from their own doing. Even in his statement of apology he had to insert a note that they’ve been working on plans to fix things:

“We’re focused on safely getting all the pieces back into position to end this rolling struggle,” he said. “Clearly we need to double down on our already existing plans to upgrade systems for these extreme circumstances so we never again face what’s happening right now.”

He went on to say how their systems work 99% of the time, but that’s not very good when each plane carries 150 or more passengers and they have several thousand flights each day.

As we’ve read in the news, Southwest uses mostly direct routes between cities instead of the hub and spoke system that other airlines use. When there’s a disruption, Southwest planes and crews are widely dispersed and not concentrated at the hubs. That makes it difficult to redeploy when there’s a weather disruption. Especially because of this, Southwest should have developed a system that allows their employees to rapidly communicate to get to their assignments. Technology is certainly capable of finding a workable solution.

Southwest employees have no app like other airlines have for use by crew members to get assignments. Instead they need to call in and wait on hold, dependent on phone schedulers. One attendent reported waiting on hold for up to 17 hours to get her assignment. Others reported sitting on flights stuck at the gate because of a shortage of attendants, but had no way to reach their supervisors to get permission to work the flight. That single failed telephone call disrupted the plans of 150 customers.

Likewise, their phone systems and websites were down for long periods of time preventing customers from getting help or even basic information. No callbacks, no effective chat system, total breakdown in communications across the company. But this is not a new problem.

Michael Santoro, the vice president of the Southwest Airlines Pilot Association in an interview with CNN said, “Our IT infrastructure for our scheduling software is vastly outdated. It can’t handle the number of pilots flight attendants that we have in the system. They don’t know where we are, then airplanes are, and it’s just, it’s frustrating for the pilots, the flight attendants, and especially our passengers, we’re tired of apologizing for Southwest.”

Santoro went on to say that the airline has had a meltdown once a year for the past several years in a row, though never to this scale.

Well before these disruptions I experienced a change in the airline’s attitude from when it was founded and from the twenty years I flew it religiously every week, hopscotching in and out of Silicon Valley. The airline made a strong point of putting their employees and customers ahead of everything else.

But I clearly remember when the two 737 Max 8 flights crashed and was shocked by Southwest’s reaction. With some of these planes in service and many more on order, the CEO immediately came to the defense of Boing, expressed support for the manufacturer, and said they trusted them to resolve the issue. They showed little concern for the safety of its employees and customers. They would not stop flying the planes, unlike other airlines that had a more cautious response.

That was a turning point for me and a big red flag, the first time they overtly prioritized business over the best interests and safety of their employees and passengers. That was the point I saw that they were a different airline.

That change in attitude began to effect all touchpoints. I experienced more flight cancellations, more delayed flights, and most noticably, the inability to reach an agent within a few minutes of calling. Waiting times went from always a few minutes to my experience in October of over 2 hours when I tried reaching them after they abruptly cancelled my flight. I said I’d never fly Southwest months before The Big Meltdown.

For many years Southwest showed the industry how to gain loyalty by minimizing many of the pain points of traveling: paying for checked luggage, getting seat assignments, and paying change fees. But these mean little when they can’t get you from point A to point B. This fiasco will cost Southwest billions of dollars in compensation, claims, and penalties, and a lot more in the destruction of a once great brand.

As to why this happened, A. A., a reader provided this insite:

Read your most recent post-could not agree more. My personal view of Southwest started even earlier. than the past few years. It’s been building since the late 2000’s since Gary Kelly was the CEO and they started hiring Delta, American and now AT&T execs and turned the airline into a bean counted, corner cutting company.

When they expanded in Dallas and elsewhere, they put a hurt on Delta and American. That led to mid level managers from those two airlines to move over as they both also had bloat from earlier mergers.  As these are mid level, mediocre types, the tyranny of the Bell Curve applied. What weakened Delta and American, came over to Southwest. Now they have former AT&T senior execs in the executive suite. These are the same corporaticians who came over from SW Bell, and ruined things, driving talented execs out, and leaving the nation with a shell of what AT&T and the Bell System could have been.