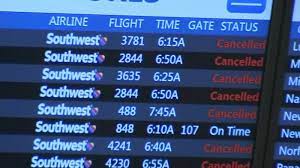 Last week’s post described our horror-able experience with Southwest when trying to fly from San Diego to Savannah, GA. I said I’d never use them again once we concluded our trip, but didn’t expect that getting back home could be just as bad.

As I arrived at Savannah Airport for our return to San Diego via Dallas, I received a text saying our second flight from Dallas to San Diego, four hours later, was cancelled and we were put on a 10pm flight home from Dallas. No reason was provided, but there was a forecast of possible tornados in Dallas throughout the day.

But what about flying into Dallas on our first flight that was still scheduled? Was that risky? And if there was bad weather, would our later flight be cancelled? When you’ve travel for so many years, you tend to play out the possibilities.

Thinking it would be better to avoid Dallas altogether, I looked at other flights from Savannah and found possible flights home via Chicago.

I went to the Southwest ticket counter, but was told by the agent that all flights to Chicago were full and there was nothing she could do. She never consulted her screen, just spoke with absolute certainty. I was surprised by her attitude and being brushed off, so I called their 800 line and was able to get a call back twenty minutes later. I was lucky to reach an agent that did want to help. Sherry in Atlanta was much more sympathetic to our plight. She rebooked us on the flight to Chicago, connecting to a flight to San Diego, but with a 9 hour layover at Midway. (Midway is Southwest’s airport with no lounges and very poor food options). But weren’t the seats sold out as we had been told? Sherry said there were still seats available. She also suggested once we get to Chicago we had more options to get home, such as flying thru Las Vegas.

Our flight to Las Vegas arrived about 30 minutes late and we rushed to catch the Las Vegas flight leaving about 30 minutes after we landed. But we needn’t have hurried because that flight was delayed 30 minutes. Or so we thought. Its departure time kept moving up because they were missing the pilot. He eventually showed up two hours after the original departure time to a big applause from the waiting passengers. We finally took off, arriving home 2 hours sooner than our original plans via Dallas. All told 14 hours airport to airport.

What I learned from this experience is the new Southwest is far different from the Southwest I’ve flown on for twenty years. Never use it for cross-country trips unless it’s a non-stop flight. There are too many opportunities for the trip to go awry, and with the level of cancellations, multi-segment trips have much worse odds of working. In my case, neither of the two cross-country flights went as planned. I’ll avoid Southwest alltogether, since they were terribly unreliable, were frustrating to deal with. Consider this:

Over the past several weeks various family members and myself flew on eight Alaska Airlines flights to and from Hawaii, San Francisco, San Diego, Santa Rosa, and Seattle. No flights were cancelled, all arrived on time, and the customer service was excellent. A phone agent was reachable within a few minutes, and they seemed to go out of the way to help. In one case, my daughter questioned the rules for being added to the upgrade list with a flight attendant, because this time she was not on the list. The attendent apologized and said it may have been an error. When my daughter landed, she had an email apologizing with a $100 gift certificate for a future flight.

After stewing on the bad Southwest experience I decided to fill out a comment form on their site, summarizing the bad experiences we had. I never got a direct responce, but my wife and I each received an email with a $150 voucher. For that we’re appreciative, but it probably will be a long time before we use them.