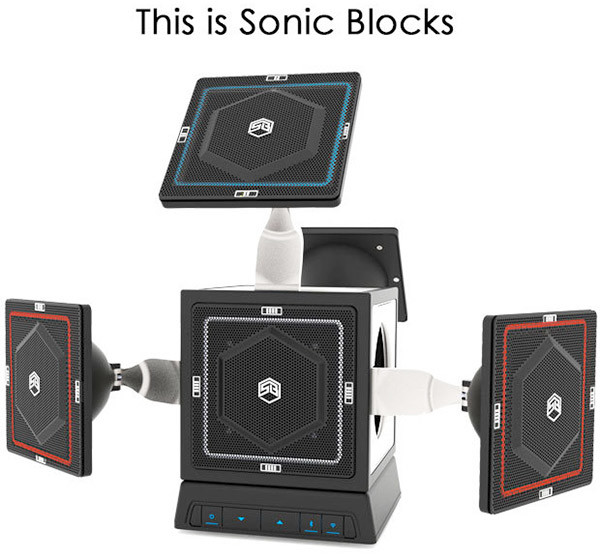 Sonic Blocks, a certified Start-Up NY company at the Binghamton University Start-Up Suite Incubator, and Benefits Corporation, announced today the launch of its Indiegogo campaign for the world’s first HiFi modular audio system. Owners will be able to customize their audio experience by selecting, swapping, and optimizing their Sonic Blocks units. The 30-day campaign is set to raise $50,000 for the creation of this uniquely customizable, patented and connected music system and technology hub. Indiegogo pledge levels range from $199 to $3,000, with a portion of the corporate profits to be given to charities related to the health and welfare of children such as (CASA) Court Appointed Special Advocates, an organization that advocates for the best interests of children in foster care who have been removed from their homes due to abuse and neglect.

Sonic Blocks was launched in 2014 by father-son duo and inventors Scott and Jordan Wilker. The idea was born after Scott and Jordan realized they had different audio preferences and wanted to create a product that would enable personalization and networking, without the limitations present in current hardware. Shortly after the company launch, Sonic Blocks was awarded Start-Up NY Certification by Governor Cuomo, which allows the company access to Binghamton University space and resources, and the Science & Technology Law Center at Syracuse University. Sonic Blocks launched the project with the Binghamton University Office of Entrepreneurship & Innovation Partnerships, staff, faculty, labs, law students, and over a dozen student entrepreneurs in multiple fields of study since inception.

Offering best in class Wi-Fi and Bluetooth technology, sleek contemporary design, and extraordinary flexibility, Sonic Blocks can be used as a standalone unit or as part of a network. Users have the unique ability to easily select, mix, match, and swap individual speaker drivers (super tweeters, tweeters, midrange drivers, and woofers) to upgrade and personalize the sound of their system. And, multiple blocks can easily and seamlessly connect with the entire ecosystem via the Sonic Blocks app, enabling users to expand and increase the functionality of the entire system.

Multiple Sonic Blocks can be stacked, used to create a surround sound, or distributed in a multiroom environment. This flexibility and connectivity makes Sonic Blocks unique among affordable wireless music speakers. The system is controlled by an easy to use App, which can be used to setup and configure the hardware, control individual DSP engines, distribute music throughout a multi-block system, and access music from your own local or online music library.

“Music plays an important part in people’s lives,” said Scott Wilker, Co-Founder and CEO of Sonic Blocks. “Our goal in launching Sonic Blocks was to create the best possible music ecosystem—one, that not only offers high fidelity audio, but also lets consumers take control of their music experience and build a system that is truly their own. There’s no other system on the market that offers this level of personalization and sound quality optimization, and Jordan and I are thrilled to finally share it with the world.”

To learn more about the Sonic Blocks Indiegogo Campaign and to back the project, visit:  https://www.indiegogo.com/projects/sonic-blocks-worlds-first-modular-music-ecosystem-bluetooth#/  The finished product will begin shipping early 2017.