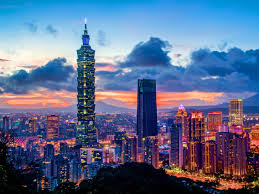 It’s always a revelation to travel to a far off destination and experience a different country, particularly in these times. It provides a different perspective, and more and more, shows us how this country is no longer a leader in so many areas, including infrastructure like transportation, the use of technology in everyday life, and in the intelligence of its government.

In fact, while on my three international trips this year, staying and not returning to our country’s dysfunctional government seemed more appealing than ever.

My wife and I just spent a week in Taipei to attend a wedding and do some sightseeing. I’ve been to Taiwan close to twenty times, all for business, but this trip gave me a chance to see more of the sights and meet with friends, instead of just visiting the factories and offices.

Twenty years ago when I first traveled to Taipei to develop some consumer electronic products for Atari, the country was far behind this country in its infrastructure with its many unpaved roads, dilapidated buildings, and a shabby airport. But now it’s a thriving, bustling city whose main export is advanced technology. Its companies are designing and building semiconductors, notebook computers and servers for the rest of the world.

Taiwan has an interesting relationship with China. On the one hand China has threatened to annex Taiwan, much as it’s trying to do with Hong Kong. On the other hand, Taiwan builds most of its technology products in factories in China and are responsible for a huge portion of China’s exports. Taiwan, along with Japan and Korea, are in a unique position, a firewall between the US and China, allies of the US, but with strategic business relationships with both countries. I was given a book by a friend in Taiwan that explains all of this in a most insightful way, Asian Edge by Colley Hwang . Highly recommended!

What hasn’t changed since my first visit are the characteristics of its people. They are as hard working as any I’ve experienced, and are wonderful to work with. With limited natural resources, their major exports are technology, all home grown.

Their progress highlights the lack of ours over the past twenty years. While not as extensive as China, Taipei has a new subway system, one one of the largest and most magnificent skyscrapers, Taipei 101, new highways, a new airport terminal, new shopping centers, and many technology office parks. While it’s not a country on many tourist’s lists – Singapore and Japan are more glamorous, it’s certainly one worth visiting. In fact, it’s technological prowess has few equals. I’d describe Taiwan as having the technical prowess of Japan with the industriousness and resourcefulness of China. Taiwanese companies also are responsible for most of the production of technology products in China. They are building the world’s notebook computers for the rest of the world.

My relationship with Taiwan blossomed when I worked for Apple. I brought Apple’s first product to be designed in Taiwan, the Apple Newton 2nd gen device, and then brought Apple’s first notebook to be designed and built there, an Apple PowerBook. Both the design and manufacturing went well and the products were each iconic to the growth of the two companies I engaged, Inventec and Quanta, each growing from a few hundred million dollars in size then to tens of billions now.

It was great to get back to see how the country has coped with its threat from China and to visit friends that have grown along with the country,  Unfortunately the trip came to an end all too soon, and we returned to a country where it’s difficult to feel the same level of pride that the Taiwanese feel about their country’s accomplishments.