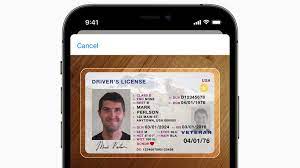 At last we’re catching up with China and other countries and moving towards a form of electronic ID. China residents have had digital ID cards that identify themselves when they check into hotels or register for government services. It’s a replacement for a physical ID card. (Of course, China has also used these digital identity cards as part of their massive surveillance system that constantly sweeps up information about each of its citizens.)

Apple announced that it has come up with a digital ID card and license. It will roll out the ability for residents of several states, beginning with Arizona and Georgia, to add their driver’s license to the Apple Wallet on their iPhone and Apple Watch. Connecticut, Iowa, Kentucky, Maryland, Oklahoma, and Utah will follow.

Apple’s electronic driver’s license will be able to be used at TSA check points in selected airports, and eventually will be able to be used just as a physical license is used. Apple has designed the electronic ID to be used without the need to unlock your phone, preventing access to other information by whoever asks to see your ID. The electronic driver’s license is presented digitally through encrypted communication directly between the iPhone (or Watch) and the identity reader, at TSA checkpoints and other locations so users do not need to unlock, show, or hand over their device.

It’s used much like the way you use a credit card on your phone. You verify it’s you with the fingerprint reader or face identity function and the information is then wirelessly transmitted to the reader. The digital license is also expected to be usable for providing age verification when purchasing liquor and other applications where we now use our license.

This is another step closer to being able to leave our wallet at home and use our phone to hold all of our insurance cards, medical cards, and membership cards, something that’s commonly done in other countries.

While China may be ahead of us in replacing the wallet with a phone, it’s facing huge backlash with its latest move in technology.

Al Jazeera reported that a new rule has gone into effect severely limiting the number of hours minors could play video games.

The new rules will only allow gaming platforms to offer services to minors from 8pm to 9pm on Fridays, weekends and public holidays, according to state news agency Xinhua, which cited a release by the National Press and Publication Administration. China had previously restricted gaming hours for teens to 1.5 hours per day in 2019.

It’s “indisputable” that indulging in online games affects normal study life and the physical and mental health of teens, the People’s Daily article said. “Destroying a teenager will destroy a family.”

Young Chinese gamers were, however, angry.

“This group of grandfathers and uncles who make these rules and regulations, have you ever played games? Do you understand that the best age for e-sports players is in their teens?” said one comment on China’s Twitter-like Weibo.