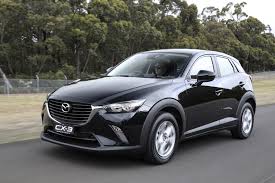 The Mazda CX-3 is the company’s new subcompact SUV that’s getting loads of accolades, including being selected as top in class by a number of automotive reviewers. It’s a car that offers a lot of features for a relatively low price, yet manages to avoid the stigma of an economy car that cuts corners. I spent several days trying it out this past week to see what the excitement was all about.

Since dissolving their partnership with Ford six years ago, Mazda has been aggressively redesigning their entire line, from its entry level Mazda3 to its just introduced CX-9 full-size SUV. Mazda has also been bringing some of the latest technology to its cars, proving that you need not spend a lot of money to be safer and have access to technology wizardry. While the CX-3 is based on the Mazda3, it has a personality all its own.

The fully-loaded Grand Sport model I drove has a sticker price of $29,260, with other versions starting at $20,000.  What’s common to all models is that they have impeccably finished interiors, excellent instrumentation and great drivability. The dashboard and door linings have soft, premium materials rather than hard plastic, and even the entry level cloth seats are tasteful.  But most importantly, the CX-3 handles really well, almost like a sports car, making it a lot of fun to drive.

Mazda offers nearly every technology feature available on cars that are twice the price, with some included in the base price, including Bluetooth hands free phone and audio capability, an AM/FM/CD/MP3 sound system with several apps, including Pandora.  Most models come with keyless entry, pushbutton start, and blind spot monitoring that alerts you with lights in the side view mirrors if someone is along your side. All models have a backup camera and a large 7-inch display. There’s one noticeable omission, Google Auto and Apple CarPlay, apps that move some of your smartphone capabilities to the display, including navigation.

One of the best safety options is Mazda’s Radar Cruise Control, which controls the brakes and accelerator, with the car essentially driving itself within its lane. The car maintains the appropriate separation over a wide range of speeds. If the car in front of you slows down or even stops, the CX-3 will apply the brakes and bring you to a stop. This is not self-driving, something that’s still years away, as you do need to keep your hands on the wheel and steer.  A lane departure warning system creates a startling rumble when you drift too far from the center of the lane. Lastly, its Smart City Brake Support System alerts you if it senses the possibility of a forward collision and applies the brakes.

I found the SUV with its SKYACTIV 16-valve 4-cylinder 2-liter146 horsepower engine to be peppy and spirited as I drove on city streets, winding rural roads and highways. The car held the road through accelerated curves, but on some roads felt a little choppy. Paddles on the steering wheel allow you to up and downshift as you move through the turns.

The Grand Touring model I drove was Meteor Gray Mica with a black interior and leather seats trimmed with brownish-red leather on the doors, a leather steering wheel, and leather trim across the front of the dash.

Seat comfort was good for this 5’10” driver.  However, seating was a little low compared to other SUVs and I found the ledge below the window on the driver’s door to be too high to comfortably rest my elbow on it while driving.

The car’s built in navigation was fairly standard and worked well. All of the maps are provided on a tiny SD memory card inserted into the dash. There’s a rectangular tray for holding the phone next to two cup holders. The car offers a USB and 3.5mm headphone jack input to play a music player.

I was easily able to pair my iPhone 6 and import my address book. But I found more than half the time, the phone didn’t reconnect when starting up. I would need to turn the phone’s Bluetooth on the phone off and on again. I experience the same problem with my 2014 Volt, so I suspect it’s Apple-related.

The car is rated at 29 mpg city and 32 highway, excellent for an SUV.

The car is available in three models, starting with the Sport at just under $20,000. The Touring version is $22,000 and adds heated seats, blind spot monitoring, and rear alerts. The Grand Touring version at $25,000 adds leather seats, sunroof, and automatic climate control. The automatic cruise control, lane departure warning and automatic braking and collision alert, are part of the iActiveSense package, costing $1900.

Seating space in the back is very tight, mostly for kids or for very short trips. Cargo capacity is adequate for shopping or even a bike with the 2 rear seats folded down.

The CX-3 is an affordable, sporty, fun to drive car that provides decent cargo space and a small back seat.  It’s well equipped and beats its competition.

As Consumer Reports puts it, “In our tests of this new field of subcompact SUVs, we haven’t seen much that impresses us. Most entries are either half-baked, or they subject drivers to a harsh ride, loud cabin, and crude interior.

But the 2016 Mazda CX-3 is different. It’s the first vehicle in this segment to make you think you can have fun with a budget-priced SUV, rather than making you wish you were riding your bicycle instead.”