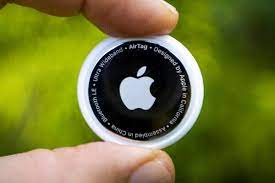 Apple’s AirTag is a tiny $30 device about the size of a quarter that attaches to an item to help you find it, should the item be lost. An AirTag contains a Bluetooth transmitter powered by a coin cell to detect nearby Apple phones to determine its own location. Since Apple iPhones are most everywhere, the AirTag can usually identify its current or last detected location and inform the owner. The owner’s iPhone provides a list of where their various devices are and displays them on a map.

The AirTag is simple to set up. Simply hold it near your iPhone and a window opens on the phone and asks you to enter the name of the item it’s tracking: e.g. keys, a wallet, suitcase, etc. Once set up, the AirTag is always on.

I have one attached to my key ring and just changed the battery after using it for more than a year. On those occasions when I left home without my keys, I’d get a reminder on my phone that my keys are not with me with a map showing me where they were.

In fact, the Department of Transportations’s August Air Travel Consumer Report noted that a higher percentage of bags between January and June 2022 were mishandled compared to the same period last year. They reported that Delta and United nearly tripled the total number of bags lost. American was last with almost 1 out of 100 lost or over 300,000 bags so far this year.

While passengers can’t use an AirTag to prevent their bag from being lost, it provides a way to more quickly locate and retrieve it. So you’d think the airlines would encourage their use.

But this past week Lufthansa began telling passengers that the use of these trackers in checked baggage were forbidden due to international requirements for electronic devices. They insisted that passengers deactivate their AirTags when put in their luggage, making them useless.

They cited regulations relating to carrying lithium batteries and transmission devices, and said they were just following the International Civil Aviation Organization’s guidelines for trackers. Lufthansa was the only airline to ban them and, as you can imagine, it created an outcry.

Apple weighed in, explaining that AirTags are allowed and meet all international requirements for use in checked luggage. They noted that Bluetooth headphones are widely used in the aircraft and AirTags are powered by a tiny coin cell, similar to what’s used in watches.

The FCC confirmed that, noting that Apple AirTags in checked luggage are not a safety hazard, are allowed, and are not considered to pose a danger.

Four days after issuing its ban, Lufthansa relented and said they did a risk assessment and will now allow AirTags in checked luggage. (Their risk assessment was probably just reading the regulations more carefully.)

While AirTags in checked luggage are safe, one unintended use of AirTags can be dangerous. When first introduced, some people were secretly planting AirTags to track others – their spouse, girlfriend, or others, unbeknownst to those individuals. That led Apple to revise their software to alert the person being followed when there was another’s AirTag near their phone for a period of time. They would get a message on their phone that a tracking device was nearby. It only works if the person has an iPhone, not if they use an Android.

There are a wide range of accessories that are available to attach your AirTag to keychains, dog collars, and wallets. Here are a few examples that I use that cost around $10 each.

TagVault- a patented holder for inserting your AirTag in your wallet

TagVault Pet – a holder that attaches to a dog collar

Ailun Keychain holder – a holder that can attach to your keychain

Of course Apple makes a couple of holders as well, but they cost more than the AirTag itself.

[Send comments to pbaker@gmail.com; they will be added below]

Would you mind posing the question to everyone about which tags seem to be the best for Android users?  I’ve been thinking about getting a couple for luggage. – DK

Trackers from Tile are considered a good tracker alternative for Android users. Tile actually was one of the first to offer a tracker, a few years before Apple introduced the AirTag, and they make a variety of shapes and sizes. Also, Samsung offers their own tracker, the Samsung Galaxy Smart Tag Tracker, but it only works with Samsung phones.