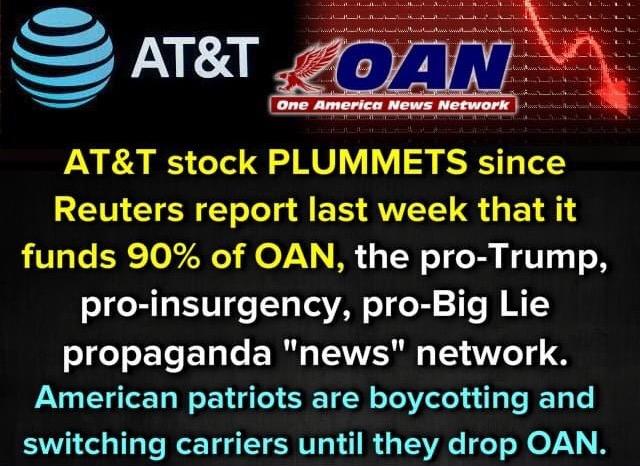 AT&T is in Hot Water

It was revealed this week that AT&T executives played a key role in the founding of the far-right conspiracy television channel One America News (OAN). An investigative report from Reuters claims AT&T was involved in the idea for the network, its creation, and provides the network most of its revenue through a distribution agreement with Direct TV, once owned by AT&T.

If you’re not familiar with OAN, it’s a new network that’s much further to the right of Fox News that has been described as all propaganda. It continuously promotes conspiracy theories that the election was stolen from Trump, that coronavirus is a left wing plot, and much much more.  Its guests have included a cast of characters such as Rudy Guliani, the My Pillow Guy, and some of the discredited lawyers that have been trying to overturn the election results.

The information about AT&T was discovered when a 2019 deposition was found by Reuters in which the owner of OAN, Robert Herring, described OAN’s relation with AT&T,  “They told us they wanted a conservative network. They only had one, which was Fox News, and they had seven others on the other [leftwing] side. When they said that, I jumped to it and built one.”

In a 2016 court document, Herring said a deal worth approximately $100 million over five years had been struck with AT&T to carry his channel on DirecTV.  Herring said AT&T had proposed taking a 5% ownership stake in his company, and that this stake would guarantee OAN a spot on DirecTV’s channel lineup. Ownership never materialized, but AT&T ultimately reached an agreement with OAN to carry it on DirecTV.

CNN tried questioning AT&T (CNN’s parent company), and reported that, “A spokesperson for AT&T deflected when asked a series of questions from CNN. When asked, for instance, whether AT&T ever discussed acquiring a 5% stake in OAN, the spokesperson only said that it has “never had an ownership stake” in the channel. And when asked whether AT&T representatives ever suggested Herring start a news channel, the spokesperson only said that it initially “refused to carry” it when it acquired DirecTV.

The response to AT&T has been swift and wide.

“We are outraged to learn that AT&T has been funneling tens of millions of dollars into OAN since the network’s inception,” National Association for the Advancement of Colored People President Derrick Johnson said in a statement. “As a result, AT&T has caused irreparable damage to our democracy. The press should inform the American public with facts, not far-right propaganda and conspiracy theories.” “We are sickened by these revelations,” Johnson added.

There’s been an equally negative response on the social networks where people report thay they are selling their shares and switching cellular carriers.

If you are an AT&T user and want to switch, you’ll find the other carriers to be receptive and every bit as competitive. Among recent rankings for cellular service and network quality, Verizon is number one, with T-Mobile second and AT&T a close third. The differences are much less than they were a few years ago. AT&T generally is worst for customer service.

A general rule of thumb for the cost of cell service is about $30-$35 per line for basic service. So two lines should cost $60-$70 and 7 lines $210-$250.  If you’re paying more than that, it’s likely because you’ve not availed yourself of the continuing lowering cost of plans. You need to call your carrier and ask for a review of your plan, and not wait for the carrier to call you. They won’t.  I make it a point to call Verizon twice a year and ask them if I have the latest low cost plan. Invariably, they will find new rates or a new plan with no change in service.

For my own account, a family plan with 7 phones, I found my cost to be about equal to T-Mobile and about 10% less than AT&T. It’s easy to compare carrier plans using one of the many comparison sites such as WhistleOut.com. The challenge when comparing is trying to understand how each plan differs, but the carriers don’t make it easy with the confusing names and options.

The major impediment or incentive to switch are the free phone offers. In recent months, when you switch to a new carrier, they’ll offer you a free phone when you buy a second, or offer a large cash incentive when you bring over your new lines. If you are on a plan where you still have a large amount to pay off, some of the carriers may help cover the cost. When I moved two lines from T-Mobile to Verizon, I got a free iPhone 12 Max Pro with the purchase of a second. You pay for both and they refund a portion each month over a few years.

There’s also less need to be concerned about your phone working on competitive networks. Most of the iPhones built over the past several years work equally well on all networks with the possible exception of the newer 5G networks, which are still not very widespread and important.

So, if you’re as outraged as many of its customers are and want to switch from AT&T, now may be a good time. There are many competitive rates, special offers, with no need to compromise your call quality.