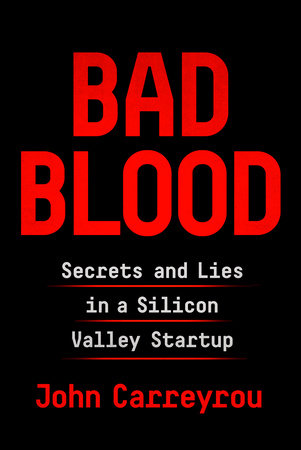 The new bestseller about Theranos, Bad Blood by John Carreyrou, is a must-read for anyone in the tech world, particularly those in Silicon Valley. Not only is it disturbing in its own right, but it’s a reflection on Silicon Valley and not in a positive way. How could its founder, Elizabeth Holmes, get away with so much in the middle of the most technology-aware community in the world?

Holmes convinced most everyone she came in contact with that she invented and perfected a revolutionary blood tester that would obsolete the competition. She did it without ever having to validate her technology. When she finally did ship her product, it was nothing more than a competitor’s tester modified without the required FDA approvals, a product that never worked. Her fraud was so effective that she raised more than a billion dollars and convinced Walgreens to put them in their stores, exposing their customers to faulty test results and putting lives in danger.

What’s given less attention is how Silicon Valley failed to detect the fraud and gave Holmes her legitimacy. You might excuse some of her board members with no tech or governing experience, but you can’t excuse the professional investors and venture capitalists. You can’t excuse the well-known attorney David Boies and his law firm that are described as behaving like thugs with their attacks and threats on those trying to reveal the truth. And you can’t excuse the Stanford professors that are supposed to discern truth from fiction.

Yes, Silicon Valley is sometimes known for faking it until making it get the promise out in front of the solution. But that’s normally an interim step done to raise money, and the outcome is either the promised breakthrough or a failed product that never gets released. It’s unheard of when a company ships a product that doesn’t work and that puts lives in danger.

Some employees and some in the tech community were skeptical about Holmes’ claims, especially when Walgreens made an investment but was never allowed to see the product in use. But the company’s protective bubble of lawyers, PR firms, promoters and VCs drowned them out for much too long. After all of this and the recent criminal indictments, a few Silicon Valley VCs still think she was wronged and blame her downfall on Carreyrou.

For those that take pride in Silicon Valley’s contribution to the world, the Theranos story is a black mark on the community and hopefully an aberration.