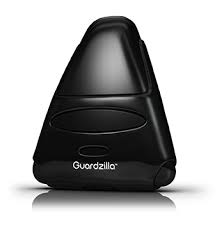 UPDATE: After 6 weeks of use, I now find the product UNACCEPTABLE. When it works it is fine, but too often it disconnects from the WiFi network. Several times a week when I try accessing its camera from my iPhone it will not work The fix is to unplug and replug it in again.

Guardzilla is like an economy version of Canary, one of the originators of an in-home camera monitoring system that alerts you when it detects motion, as well as displaying a live view. At just $100, it offers similar functionality, but with a number of tolerable compromises.

The camera is not very high resolution, the product is not particularly attractive, but the Guardzilla does a good job in providing you with some assurance when you are away,  And, at this price, having 2 or 3 of them spread around your home might just be more effective than having one hi-res unit in one location. That’s because one camera can only cover a limited area in your home.

Guardzilla is easy to install, requiring you to first pair it with your phone, and then connect it to your WiFi network. It’s straightforward app lets you check on what the camera is seeing and set up to be alerted when it detects motion. Unlike the Canary, you cannot view video that may have been recorded when it encountered motion. Instead it’s recorded on a memory card for viewing at home.

One caveat with this category of products. Expect false alarms. On the Canary, which I continue to use, I often get false triggers on my phone. In analyzing them, it apparently results from moving shadows and reflections on the wall from cloud movement. I’ve not experienced false triggers on the Guardzilla yet, but it is located in a different location.

Lastly, the one reservation I have with Guardzilla is that on two occasions the unit was unresponsive and I was unable to view a live image. Each time I needed to reset the unit by removing the power and then plugging it back in. That’s not something you can do if you are away.