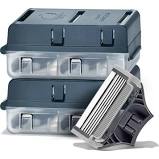 Gillette has lost market share with Harry’s and Dollar Shaving Club lower prices. Once over 80% MS, Gillette is down to 60% of the U.S. market for men’s razors and blades.

Now, Gillette has begun running ads saying, “Most guys leave Harry’s after trying it,” as part of their “Welcome Back” campaign. But Harry’s says its data shows that of the 375,000 customers who subscribed to Harry’s in the past six months, 81% have purchased additional products.

“We know competition is new to Gillette, but this campaign feels desperate and off-brand for them,” Harry’s said. “It is clear validation that Harry’s is having a significant, positive impact on the market and that people are responding by switching to Harry’s and staying with us.”

This seems to me to be a desperate campaign from P&G, and one that simply calls attention to Harry’s. If you are tired of spending $4 per blade, I’d recommend trying Harry’s. The blades last as long, shave equally close, and costs less than half the price. And it sends a message to P&G that their price gouging should come to an end.