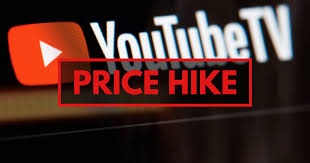 Moving from cable to streaming for TV watching just became more expensive. In earlier columns, I analyzed the benefits and cost savings of making the move. While there was a small cost advantage, the main benefits were convenience, simplicity, and access to a wider variety of content that you could pick and choose from and pay accordingly, and not be subjected to the need to take it all from the cable companies.

Well, that’s not working out so well with an announcement this past week that YouTube TV is raising their monthly rate from $50 to $65. They claim it’s not as bad as it seems because they’re adding a bunch more channels (that few want), and it’s not an option. That move exploded the expectation that streaming would allow us to buy and pay for the stations we want and not be forced to take the stations we don’t want. YouTube TV is now no better than the cable companies in this regard. And, not surprisingly, other YouTube TV competitors followed with their own price increases.

YouTube TV makes this move from a position of strength. Among all of the other services for accessing network and local TV, YouTube TV is the only one that  offers unlimited storage that allows you to watch the programs when you choose, as well as having the best access to the networks and local stations.

The best way to counter the increase is to find a friend to split the cost and share your subscription, something YouTube TV encourages.

Still, after a couple of months of shedding my cable TV and cancelling my three TiVos, I’m continuing to find streaming to be an improvement. All my TVs can access the same stored programs, there’s no more hardware clutter around each set, and no more issues getting TiVo and my cable company’s tuners to play nice together.

However, streaming is not without its own issues. My new “Smart” Sony 55-inch TV uses the Android TV OS, and occasionally YouTube TV would freeze and refuse to play.  It was caused by a software glitch on the Sony TV, and was eventually corrected with a software update from Sony. During the interim I added a Roku adapter to the set and accessed YouTube TV through that.

If you’re interested in getting into more depth on streaming, the good and the bad, check out Jared Newman’s free weekly newsletter. Newman is the leading tech journalist following the area.

I’ve been trying out the new Hey email product during it’s free 14 day trial,  Now that it’s coming to an end and is requiring a $99 annual fee to continue, I had to decide whether it’s worth the cost and decide if I should buy it.

Hey is a service that’s intended to make email less of a task to get through and, after training, automatically screen your mail into three buckets, important mail, mail you want to review but is less important, and mail you want to retain for records of transactions. There are other benefits, such as reading your less important mail in one long blog, and pinning some mail off to the side for accessing later on.

I found that it did some things better, while some things ended up a little more complicated than conventional email, but it didn’t improve the process enough to justify its annual fee.  The screening process often took more time and occasionally presented conflicts. Mail from Apple, for example, contained records of monthly payments that were sent to the mail with records. But some mail from Apple I wanted to read right away, such as information about upgrades.

I think everyone will have similar cases that are not resolved with Hey’s rules and require careful thinking. Additionally, when scanning new email, each message needs to be clicked opened for it to be removed from the main view. In conventional email, you can peruse new email by looking at it’s 1 to 3 line summary and choose to ignore without opening, and it automatically scrolls out of the way as new email comes in.

Hey Mail provides a new simplified interface, but it’s also limiting when composing new mail, such as adding bullets and other formatting. It has no auto signature capability, and its on screen interface does not at all look like the email my recipients receive. Now, the product is new, and some of these features may be added, but until it does I’m not ready to spend $99/yr for an email that overall is not much simpler that my Apple Mail and Gmail.

I currently use SaneBox, an add on service ($59/yr) to my existing email, that can also be easily trained to separate email into different folders,  allows mail to be set aside for later use, and works with the email service you are used to. In addition, all of the email remains on your computer, unlike Hey, that’s stored on their servers, and inaccessible when offline. But its best feature of SaneBox is being able to drag any email from a sender you never want to hear from again into a folder called SaneBlackhole. It works and is satisfying.

So while Hey offers another approach with some good features, its current benefits don’t outweigh its limitations, particularly at its hefty cost.

In an upcoming column I’ll be reviewing a radically new email service called Superhuman. It’s an invite-only email product with a reported 300,000 person waiting list that works only with Gmail on a Mac.