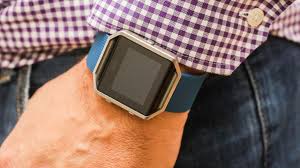 Fitbit introduced their new activity tracker, called the Blaze, at CES last week. And since then, the company’s stock has dropped by nearly 30 percent.. The product was panned as being ugly and under-featured, particularly for its $200 price. Even if you assume what they showed was a prototype, the product looks much like an “As seen on late night TV” copy of an Apple Watch done poorly. Instead of a clean modern design it has angular corners and gaps between the cheap looking frame and tracking module.

I’ve been using a Fitbit Charge for a few months and love it, I use it along with a watch on my other wrist. It’s gotten me to do more walking by track my activity each day and allowing me to set my goals. But it’s charm is its subtlety. It’s hard to believe the Blaze came from the same company.