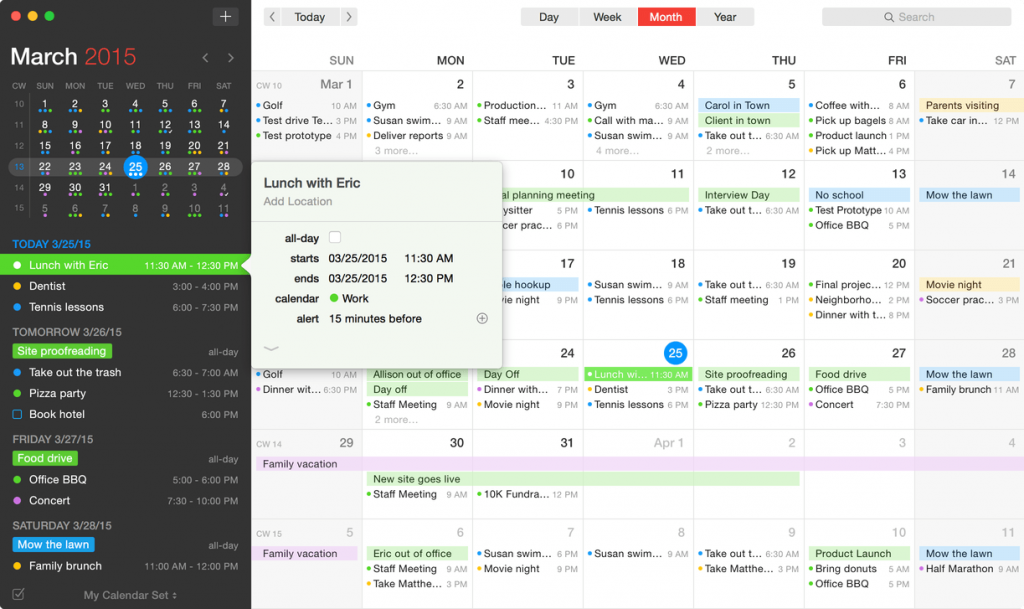 For those of us that use Macs, it sometimes feels like Apple is abandoning us. iPhones and iPads are a much more lucrative business for them than their notebooks and desktops computers. Apple’s CEO Tim Cook even touted the iPad Pro as a notebook replacement. And it shows in other ways: some of the software included with the Macs haven’t improved in years.

Take iCal, Apple’s calendar app as an example. It’s one of the most utilized applications on the Mac, but the engineers have done very little to advance its capabilities in years, content to make it “good enough”.  How much better can it be? A company called Flexibits has created a rival app that far out performs iCal, adds new features, and is just as easy to use. The $49 app is called Fantastical 2 and really lives up to the name.

It’s better in several ways: it provides a small floating window you can use even while using other apps, you can enter appointments and reminders much easier using simple phrases, it can work with Google Maps – not just Apple Maps, and its views are much more useful.

One of its most powerful features is its natural language capability. That means you can create an appointment or reminder just by typing it in. For example, you can type “lunch with Jane on Wednesday”, and an appointment will be created at noon next Wednesday that reads “lunch with Jane”. You can add, “Remind me an hour before”, and it will set an alert. Not only can you add appointments, but you can also create reminders. Just type, “Remind me to call Dan on Monday”, and it will add it to your calendar along with a check box to designate it as a to do item. As you add the words, animation on the screen cleverly provides feedback of how it is interpreting each word.

Like iCal, you can click on an address in an entry, but you can choose to open the address in Google and not be required to use Apple’s inferior Maps. Google Maps will display the location as well as a list of points of interest in the area.

Fantastical 2 also provides a calendar icon in the menu bar at the top of the screen near the time and date. Click on it and a small drop down window opens, displaying the monthly calendar and a schedule for the day, similar to the left-hand window. You can also use it to create a new reminder or appointment in the same way as using the full window, and you can grab and move the window around the screen and leave it open while you do other work using other apps. Fantastical 2 also lets you chose to display different sets of your calendars depending on where you are.

When you download Fantastical 2 on your Mac, it instantly imports all of your appointments from iCal and will fully sync with all of your calendars on your iPad, iPhone and in the cloud. In fact, I ran both iCal and Fantastical 2 together for the first few days to be sure my appointments were not lost. Entering appointments in one app or the other caused it to show up in the other one instantly. Once I became confident of how well it worked, I’ve closed iCal and have not gone back to it, as it now seems primitive by comparison.

Fantastical can be downloaded from its site for a free 21-day trial. Well worth the $49 to free you from the staid iCal.