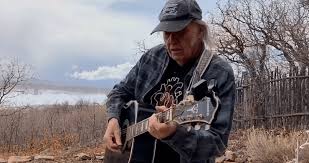 While confined to home, we can’t complain. While our grandparents were asked to go to war, we’re being asked to stay indoors and wait.  The best thing we all can do now is to remain isolated until the crunch on the medical system passes. With streaming music, video, You Tube, TV, Netflix, Amazon Prime, and dozens of other services, there’s plenty of entertainment to keep us occupied.

I’ve been very fortunate to be working on a project that is adding to the entertainment options and entertaining tens of thousands of people around the globe. I’m leading a tiny, but talented team, working with my friend Neil Young developing his archive website, www.neilyoungarchives.com. Just over a year old, it continues to grow rapidly with new content and fascinating information – including hundreds of audio and video performances. Many tell us they’re spending hours each day exploring and listening to all of Neil’s music and watching his videos. Here is where you can find the current Fireside Session.

And now, with the advent of the coronavirus, Neil and his wife, Daryl Hannah, are creating mini-concert performances called Fireside Sessions filmed from their home in Colorado using an iPad and some jury-rigged equipment. While access to the site costs $20/yr to help cover its cost, there’s no charge to view these special performances.  And while they air, the entire site is opened to all.

The first Fireside Session was a half-hour of Neil and ran for 6 days. It was a six-song acoustic set recorded outside in the snow and inside in front of a roaring fireplace.

As noted in Rolling Stone, “The show takes place all over the house and is packed with rarities, including the first performance of the Hawkes & Doves deep cut “Little Wing” since 1977 — the only time he’s done it without his short-lived band the Ducks. He also plays the 1974 non-album cut “Love/Art Blues” for the first time since 2008, along with fan favorites “Tell Me Why,” “Razor Love” and the On the Beach classic “Vampire Blues.” The latter song has been done several times with Promise of the Real over the past few years, but this is the first solo rendition since 1974.”

A second session will be available shortly and more are in the works. Neil’s gift to the world during these stressful times! Check it out here.

Visit Japan from your Living Room

While we can’t travel right now we can enjoy some great travel videos. I stumbled upon a recently produced  6-part series on Amazon Free called James May, Our Man in Japan.

It’s a tour of Japan from the north to the south by this British humorist. It’s spectacular in its breadth, photography and humor. There are numerous scenes that are Monty Python hilarious. I binged watch in two evenings. Highly recommended.

The are the links I check out each day that cuts through the commentary and provides a visual picture of what’s going on locally and around the world using graphs and charts.