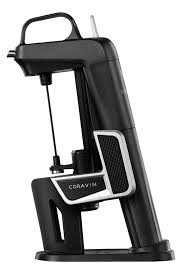 Tonight my wife wanted a glass of white wine and I wanted a red with our dinner. I was able to pour a glass of each from unopened bottles and then put the bottles back in my wine cabinet to use another time.

I was using the Coravin wine device that lets you enjoy a glass of wine without opening the bottle. It’s been available for over a year, and as an early adopter and wine lover, I’ve used it on a regular basis. And now the company has released a new model that improves upon the original.

The product was developed by a medical engineer whose goal was to figure out how to pour wine from a bottle without removing the cork, so he could sample a glass and allow the remaining wine to continue to age.

Once a bottle is open, it begins to deteriorate as oxygen comes in contact with the wine. While there are a number of gadgets to reduce the deterioration, such as pumps to remove some of the air, they lose their effectiveness after a few days. As a result, a bottle generally needs to be consumed within two or three days after opening. It’s also not been possible to sample a bottle to see how its aging or determine if it’s ready to drink without halting the aging process.

The new Model Two looks similar to and works much the same way as the original (now inexplicably called Model Eight). The new model is a redesign of the original and is a little sleeker, works more smoothly, and pours a little faster.

Both models are about the size of a large over-the-bottle corkscrew and are made of metal and plastic.  A small argon gas cylinder is screwed into its body and the device is positioned around the neck of the bottle, held in place with a spring-loaded clamp.  As the top handle is pushed down, carrying with it a hollow needle and spout; the needle pierces the foil and slides into the cork.

You then tilt the bottle and pour the wine, while occasionally pulling a trigger to keep the wine flowing. Each pull injects a little more argon gas.  (Argon is used to pressurize the bottle, which both propels the wine back up through the needle and preserves the remaining contents by reducing contact with air.)

After pouring, the body holding the needle and the spout is slid upward, extracting the needle. The cork then seals itself, so that the bottle can be put back into your cellar or wine rack in its normal near-horizontal position.

The new model pours slightly faster, taking about 20 seconds to pour a glass.

The significance of the Coravin is that it provides much more flexibility in how we consume wine.  You can enjoy a glass without needing to consume the rest of the bottle, and you can pour a glass from an expensive bottle while still allowing it to age for years more.  While it’s great for home use, many restaurants are now using the Coravin to offer an expanded list of wine by the glass.

Without this device, most restaurants had a limited selection of wines by the glass, because they do not want to serve wine that’s deteriorated from being open for more than a day. This device allows them to expand their list, and even offer premium wines that would normally not be sold by the glass.

Jeff Straus, the owner of Pamplemousse Grille in Solana Beach, CA, one of San Diego’s top restaurants, was an early investor in Coravin, because he saw its potential, not so much for home use, but for use in restaurants such as his.  He’s now offering a “Wines by Coravin” list where he serves a dozen premium wines from wineries such as Screaming Eagle, Chateau Lynch-Bages, Kistler, and others in both full and half-glass portions. He told me that the Coravin is now in use by thousands of restaurants.

What are the negatives? Pouring a glass of wine takes longer, the needle and spout need to be cleaned after each use, and it’s not inexpensive. The Model Two costs $349, $50 higher than the original Model Eight. And the replacement gas cylinders cost $10 each or about 75 cents per glass. Which should you buy? Save your money and buy the original. The differences are minor. If you are a wine lover, this product will change how you consume wine.