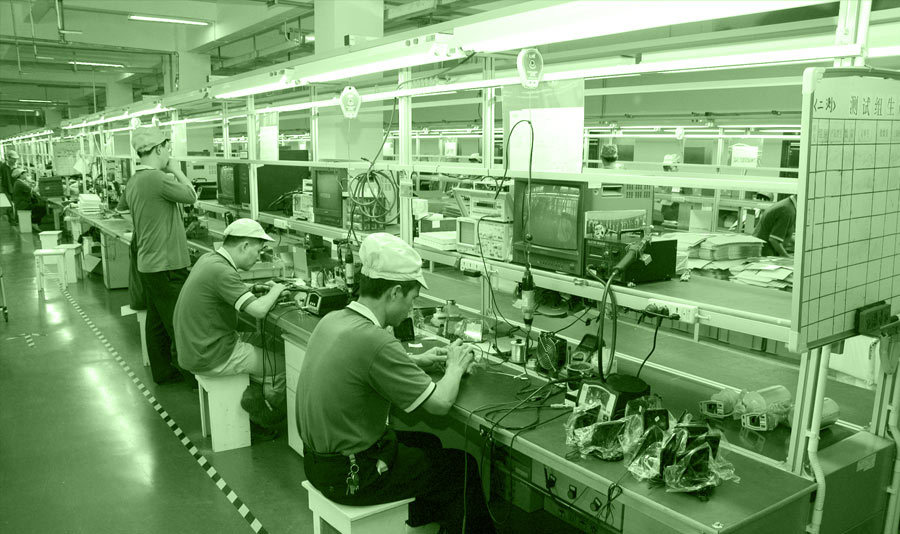 I’m pleased to announce that the following column was selected as Column of the Year by the San Diego Society of Journalists:

Why can’t the US build consumer electronic products?

I recently returned from a short trip to Shenzhen, the large Chinese city less than an hour’s drive north of Hong Kong. When anyone wonders why we don’t build consumer electronic products in the United States, the one-word answer is Shenzhen.

When I first traveled to this city more than 30 years ago, I’d walk out of the train station and see locals hawking live chickens and the sidewalks filled with homeless people. I’d get into a cab that was usually filthy, both inside and out, and pray for my life while the driver navigated gravel roads full of ruts while his head was sticking out his window because the windshield was covered with mud. At that time, the area was full of factories making cheap consumer goods. Now Shenzhen is a large modern city comparable to Shanghai or even Hong Kong.

But as I was reminded on this trip, Shenzhen has turned into the world capital of consumer electronics manufacturing. Shenzhen is to the making of these products as Silicon Valley is to designing them.

In fact, there’s a practical bond between the two areas, evident each day at breakfast at any one of the dozens of internationally branded hotels, such as the Sheraton, Shangi-La, Hyatt, Hilton, Four Seasons, St. Regis and Westin.

At breakfast you see tables full of young American engineers and project managers from Apple, Google, HP, GoPro, Amazon and dozens of smaller startups beginning their day of heading into the factories to solve problems to get their products into production. For many, it’s a constant shuttle between San Francisco and Hong Kong airports, as often as twice a month for some.

After a few visits, it’s certainly not much fun to make the 15-hour flight, especially crunched up in an economy seat. But in spite of that, making the trip is the best way to take your product from an idea to manufacturing with the best chance for success — not just for large companies, but even for entrepreneurs with an idea.

Shenzhen companies thrive on building new products, and there are usually companies skilled in your area, so you can find an experienced team for not much cost, because they want to fill their factories.

Shenzhen looks much like any other large modern city, but with a population of 10.35 million, everything is in large scale. It has the largest library in the world and the largest city hall. Beneath the appearance of a buzzing metropolis full of skyscrapers and clogged highways, is a network of thousands of companies focused on supporting the world’s thirst for the next smartphone, HD TV or gizmo you didn’t know you needed until you read about it.

These companies are housed in factories scattered within a two-hour radius that vary from nondescript cement structures to sprawling office parks that look like ones you might see in Japan or Taiwan. Depending on what they produce, they can be as clean as an automated Japanese factory or something resembling a sweatshop from the 1930s.
Occasionally, but not often, there will be a factory producing low-cost components that barely skirt the laws of tolerable working conditions, but that’s the exception rather than the rule when it comes to technology products.

But what this network in Shenzhen — supported by huge factories in other cities such as Shanghai — does better than anywhere else in the world, is build huge volumes of the components that go into consumer electronic products: lithium-ion batteries, LCD displays, touch screens, motors, electrical components, switches, plastic moldings, printed circuit boards, semiconductors, packaging, antennas, speakers, microphones, leather, plastic and other assorted materials. And for each component, there are scores of companies in intense competition that keep the prices down and advance the technology.

There’s one human characteristic that’s also important, and it’s not labor costs, although that is a secondary factor. It’s the attitude of the people who work in this industry. They have a high work ethic and can-do attitude that gets things accomplished without any fear of failing or thinking something can’t be done — even when sometimes it can’t. Whether companies are thriving or struggling, they will rarely turn away new business, and most have an insatiable thirst to try new things so they can learn and grow.

Now, it’s not all rosy. Every company has strengths and weaknesses, A teams and C teams, smart and not so. Interest in taking on your product can wane if sales don’t meet expectation or if a bigger customer comes along. It’s often painful to get things done with junior people. But in the end, there’s no better alternative. As to copying your product, it’s not a big issue, and when it occurs, it’s usually by other companies that become aware of it once the product goes on sale.

I’m often asked why we can’t make these products in the United States. When it comes to a high-volume consumer electronic product that contains a variety of components, building it in the United States is just not practical or often even possible, while still maintaining the cost, quality and fast time to market. And even if it were, we don’t have the same attitude of taking quick action and being responsive.

When Motorola tried building its smartphone in a plant in Texas, the company needed to import the parts from China. There are virtually no companies in the United States that make batteries, displays, speakers, semiconductor chips and wire for mass-produced products. While there may be companies building some of these components in low volume for the military, few are competitively priced.

The United States does build printed circuit board assemblies (PCBAs), partly because it’s a highly automated process using assembly machines and components available worldwide. But you still need to take those PCBAs and combine them with the touch screens, the lithium-ion batteries and the tiny motors and speakers. To import these efficiently you must send them by boat; that takes a couple of weeks and ties up lots of dollars in inventory costs.

But more importantly, suppose that when the displays arrive, they have a defect. What do you do? If you were building the product in Shenzhen, you would call the company that’s an hour away and they will have engineers in your factory in a few hours to fix the problem. Try that from the United States and you would likely shut down your assembly line for several weeks.

Multiply this by the hundreds of parts and processes that go into your product that comes from China. Not only is it inefficient, but it’s also just not practical to build these kinds of products in the United States. And even if a company were to try, it could not compete with its competitors on many dimensions. A perhaps cruel, but accurate, analogy is trying to build an automobile in the Arctic from parts made in Detroit.