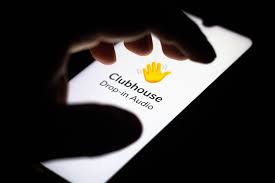 Seemingly out of nowhere, the app Clubhouse has became one of the most talked about new social platforms since Facebook.  This iPhone-only app currently can be activated by invitation only, adding to its buzz. It’s been around since March of last year and supposedly has six million users around the world.

Clubhouse connects people of like interests to user-created audio programs, much like a cross between a radio talk show, a podcast and a conference call. Members can listen in on discussions conducted by celebrities, experts, entertainers, or most anyone with a point of view. It can be an unrehearsed meetup or a regularly scheduled show.

Currently, a member can invite two others, and get then additional invitations over time. The company expects to open  the app to the public later this year, once it gets through its current beta phase. Available now only as an iPhone app, it’s likely to also expand to other platforms.

After joining you can select subjects that interest you, such as travel, technology, or most anything. That allows Clubhouse to notify you of upcoming Clubhouse events that you might want to attend.

If you see an event of interest, you can join as a listener, or in some cases, be allowed you to ask questions. Typically, these events are led by experts in their area, and might include one or several on a single event. It could be an interview, a lecture, or an ad hoc discussion. Once the event is over, it disappears.from the site and cannot be accessed again unless the host or a listener chooses to record it. I would expect other independent sites to emerge that record and catalog the best of these events for later access.

I recently was invited to join by a friend who asked me to join him in creating a Clubhouse show about product design, called “Love to Build.” He gave me one of his invites, so now I’m a member. Since installing the app, I’ve received notifications about other events that might interest me. Also, like Twitter, I can follow people or they can follow me. In fact, it asks you to connect to Twitter to learn more about your followers and interests. That in turn leads to more recommendations to events.

These invitations will likely become more accurately targeted once I use it more. But today, for example, I was invited to attend : Global Legaltech Club, Property investments, and Power of Global Connection, none that target my interests.  The events have a starting time and can easily be added to your calendar with a single click. To join the meeting, simply click on the link. When the event begins or during the event, you enter the room, and see the headshots of each of the attendees. Clicking on any of them displays their profile.

As an example, today I checked the ongoing meetings on the app and saw an interesting topic, Dealing with Imposter Syndrome. There were about 120 in the group, led by 4 career coaches. It was the meeting of The Career Club that runs several of these events each week.

Clubhouse is a powerful idea with real significance and enormous potential. (We already know that because Facebook announced it will develop a similar capability, following their tradition of buying and copying competitors.) It offers the ability to host useful discussions or even entertainment, and provide timely news to a specific audience, and allow people and businesses to promote themselves. Audio programs no longer need to reach a large audience and can be targeted to a group of any size. Its success will be dependent on how well it connects its members with meaningful  and interesting topics and how many of us want to be listening to a new form of news and entertainment.

The app’s effectiveness is dependent on using your address book to reach out to others, which can lead to privacy issues or other misuses. Once you share it, it sits on Clubhouse’s cloud, and currently there’s no way to remove it. And we know from Facebook that apps that specialize in connecting people of like interests can also be used to also unite those with malicious intent.

Clubhouse’ success will be dependent on how well it can police its site and allow it to be used for what it was intended. Since anyone can enter any room at any time, there’s potential for disruption. As the company needs to grow revenue, will they become another Facebook and share our personal information with advertisers, or stick to their original idea of building a new platform that can educate, entertain and communicate with those of similar interests? The good news is there should be competition in this area. In addition to Facebook building their version, Twitter is testing Spaces, and Mark Cuban will be rolling out his version called.Fireside.