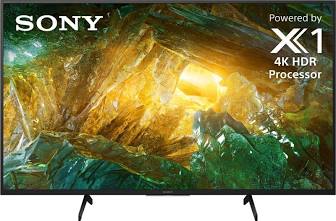 With our spending more time at home and with all the streaming entertainment available, now is a good time to buy a large screen TV (HDTV). New models are being announced, older models are being closed out, and the annual Super Bowl sales are about to begin.  Even without the sales, you can find decent HDTVs for as little as $110 for a 32-inch size and $300 for 55″ and 65″ HDTVs.  But there are also HDTVs for $2000 that look much the same. So how do you make an intelligent selection?

TVs for any room

The last time you bought a TV to go in a new location, you needed to call your cable company to get a new cable tuner and add a cable connection. With streaming that’s no longer needed. An HDTV with a streaming service is completely self-contained and can be put in any location in your home, as long as there’s a WiFi signal. Simply plug it in and connect to WiFi and watch. Freedom from cable companies means freedom of location.

There are numerous brands to choose from, including some you’ve never heard of. TCL and Hisense are giant Chinese manufacturers, while others are house brands and products license their name. There are so many good choices from the top manufacturers, I’d avoid licensed and store brands such as Westinghouse, Polaroid, and Insignia.

The top tier companies that design and build their own sets are Samsung, LG, and Sony, Samsung and LG are the world’s largest flat panel manufacturers, while Sony buys there panels from others. They all offer a full range of models in all sizes from 43-inches upwards. The most popular sizes are 55-inch and 65-inch.

Each of these brands offer multiple models in each size that typically fall into three price ranges for three levels of performance: good, better and best. Invariably, the best sets are those using OLED flat panels, the same display technology used in the top of the line cellphones. The others use LCD technology, much like our computer displays. OLED displays offer higher contrast, better sharpness and blacker blacks. LCD displays used in the other models vary in technology and account for the large majority of models sold. The product lines typically fall into these categories:

In the lower end sets, the processors are less powerful, making it less able to make minor corrections in real time, and the sound may not be quite as good.  Yet, in spite of these compromises, these models offer very good performance, similar to sets that cost $2000 just a few years ago.

Other brands to consider include Vizio, TCL, and Hisense, that tend to be a little less expensive and offer good value. TCL and Hisense are top sellers in their China market, and in recent years have gained popularity here for their lower prices and bonus features such as having Roku built in.

Among all of the companies, only Vizio is a US company. They contract their manufacturing to China, much in the way Apple contracts their products. LG and Samsung are Korean and Sony is Japanese, but all of them build sets outside of their home countries, primarily in China.

All HDTVs now  are smart TVs, which means, just like a phone, there’s an operating system to control the TV and add apps from the various streaming services such as Netflix, HBO Max, and You Tube TV. Samsung and LG use their own operating system, Tizen and WebOS. Sony uses Android TV. TCL sets have Roku built in. Roku can also be added to any set by buying their plug in stick. Most all of these OSes offer access to all of the major services.

Android and Roku tend to be the favorites. Some complain that Samsung’s Tizen generates ads that can’t be turned off. In fact, in examining hundreds of Samsung reviews, it’s rarely the image that’s criticized and more likely random annoyances such as pop-up ads and their policy of data collection, audio clarity, and hard to use remote controls .

I’ve tried some of these operating systems and read reviews of others, and rank them as follows: Android, Roku, Tizen, and WebOS.

I’ve read hundreds of reviews, including those from experts on tech sites and customers on Amazon and other retailers, and there is often little consensus. Professional recommendations too often are based on the number of features – the more the better. Unfortunately, today many of the reviews are tied to affiliate programs that provide compensation should you click to a retail site. I find the Amazon and Best Buy customer reviews much more useful. That’s where you learn about real issues, such as Samsung injecting ads, difficult to use remotes, and poor customer support. So I’d encourage you to do that with any HDTV you are considering.

The best OLED technology comes from LG, and the most advanced LCD technology comes from Samsung. None of the companies seem to offer great customer support.  That’s why you might try to find a suitable choice at Costco, who has the best reputation for service, often offering a free extended warrantee and an easy return policy.

Costco seems to offer prices that are often $50 less than Best Buy and Amazon when they have a sale, and sometimes include a free extended warranty. For those that want the lowest cost/largest size screen, TCL, Vizio, and Hi-Sense are good options. For those looking for a step up in quality, choose the “Better” LCD models from LG, Samsung or Sony. You’re getting most of the features of the OLED at one-third to half the cost.