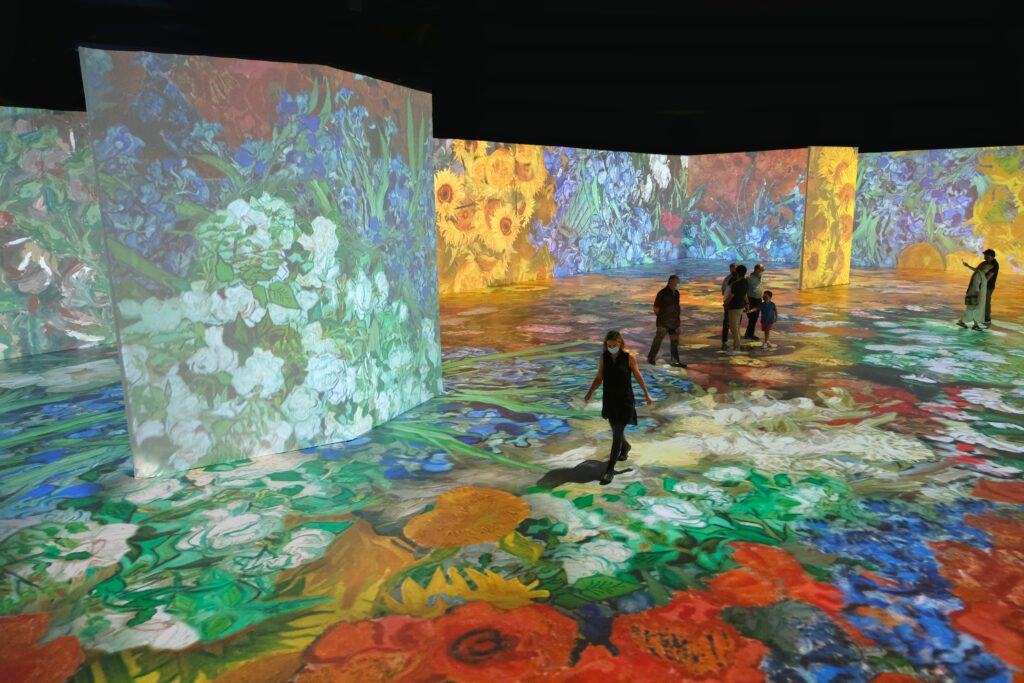 If we can’t travel to museums in distant lands, why not bring the art to us? That’s the premise of the multi-media presentation of the works of artist Vincent Van Gogh that’s been touring the U.S. Called “Van Gogh, The Immersive Experience.” I attended the exhibit that recently opened in Del Mar (San Diego.) Part way through its two year world tour, the exhibit will be traveling to another dozen cities in the U.S. this year. The exhibit has already sold over two million tickets globally.

I found it to be a moving experience, literally and figuratively. It’s a three dimensional experience where you’re immersed in more than 300 works of the Dutch-born post-impressionist artist. It’s not a movie, not an exhibit, but rather a series of images, some still, some moving, projected on huge walls and floors, free-standing screens, and posts. You can stand in one place, walk around, or just look around., while everything is constantly changing and constantly in motion.

Some images of the art are fully formed, some slowly being created, and some are animated stills, such as the blinking eyes on a portrait. One moment we see a gallery of portraits, mostly of himself, because he was too poor to hire models. The next moment we see his The Starry Night filling a room the size of four large ballrooms. Then we see everything morph into Sunflowers. The non-stop continuous presentation lasts for about an hour, so it doesn’t matter when you enter.

“An imaginative and fully-immersive adventure, Beyond Van Gogh takes on the challenge of breathing new life into Van Gogh’s vast body of work. Through the use of cutting-edge 3D projection technology and music to illuminate all of his genius, guests can experience the artist with all their senses,” says Mathieu St-Arnaud of Normal Studio in Montreal, responsible for its production.

We’re transported in this specially designed space that’s comprised of three areas that flow from one to the other. The Introduction Hall, where we learn about Van Gogh’s life, leads into the Waterfall Room, which flows into the vast Immersive Experience Room. Van Gogh’s spectacular paintings are not in frames, but appear on projection-swathed walls, where we become fully immersed in the paintings, able to see close up the incredible detail of his work. His works literally surround us with ever-shifting, swirling and colorful flowers, townscapes, cafes and stunning landscapes. All of this is accompanied by a symphonic score. And yes, part of the score includes Don McClean’s “Starry Starry Night.”

I had a chance to speak to one of the designers of the exhibit, Fanny Curtat, of Normal Studio, who was a part of the design team. I learned it took more than a year of work and some amazing imagination and technical wizardry to put it all together. Being technical, I looked all around to get a sense of how it was done. I couldn’t imagine how they were able to coordinate hundreds of moving images being projected in scores of different directions all at the same time. The number of projectors used is confidential I was told, but I counted more than sixty as I looked around the ceiling.

While artificial reality is the hot new buzzword in tech, this exhibit is real and immersive, transporting us away from the stresses of the day into an entirely new world. It was the best one hour vacation ever. Cost is about $40 and attendance is limited to allow plenty of distancing during Covid.