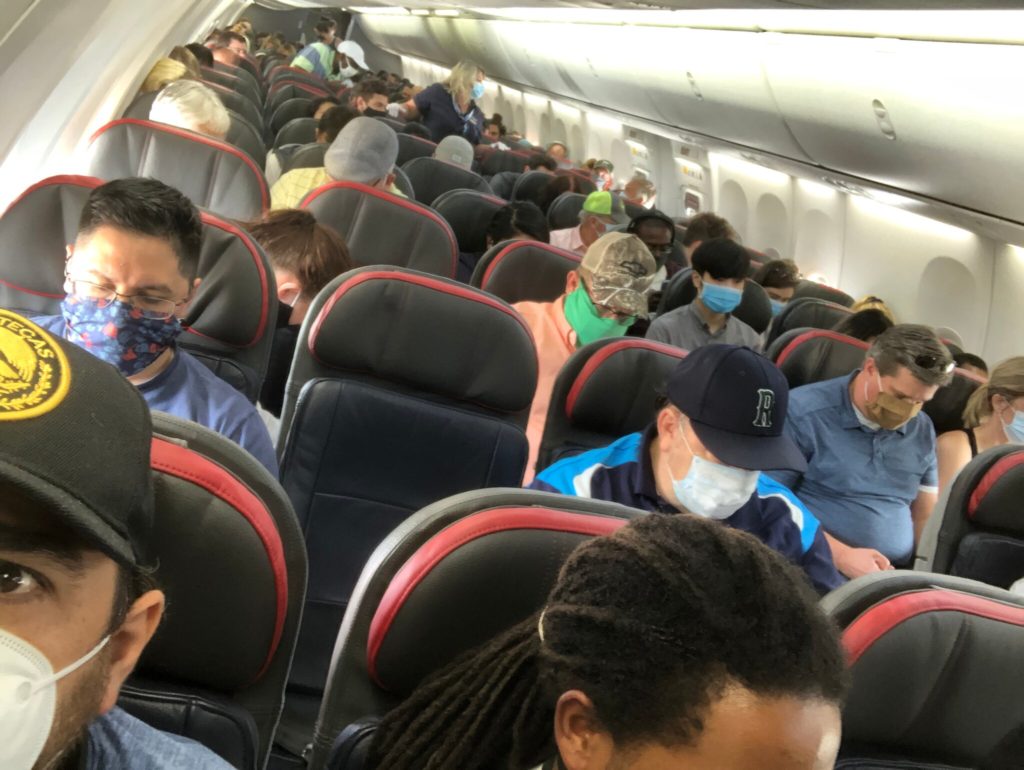 My wife and I just returned from our first vacation since 2019- a 1200 mile driving trip in the Northeast- bookended with flights on Southwest and United from and to our home in southern CA. Bottom line: I’d rather be driving than flying, even with the costly rental cars.

The trip was to visit friends and relatives after deciding that was much more important than visiting a new destination.  Along the way we experienced some of the new rules and rates imposed by the travel industry. While the industry received huge subsidies, many were still struggling with limited help and long waits for help.

The first thing I noticed were the TSA members we came in contact with were a much friendlier bunch, even with the more normal crowds. But many concessions in the airports were still shuttered. Passengers seemed to go out of their way to be polite and no one we encountered had a mask issue. Obviously, many appreciated the ability to leave their long isolation and take a trip. Our Southwest flight to BWI was full and right on schedule. WiFi worked well and cost $8 for the cross-country flight, a bargain these days.

Rental car rates were as bad as you’ve heard – double or triple the pre-pandemic rates. It required some changes to our normal routine. Instead of picking up the car at the airport, we saved 30% by picking it up at a location in town.  We also reduced the length of our rental by getting the car a couple of days later and returning it a few days sooner- and not having the car sit around during our visit with relatives at each end of the trip. As a result our $1500 one way airport rental for 10 days was reduced to $600 for 6 days.

Before booking I checked numerous sites for the best rates. I found Costco Travel to offer the best – about 10% below Expedia. They make it easy to compare rates across all major companies and locations, and allow you to get the benefits of your your rental membership. And no need to register first to check the rates, unlike some of the other car rental sites.

Driving through Delaware, New Jersey, New York and Massachusetts inevitably means encountering toll roads with electronic payments. It would have been unwieldy to call each of the states to pay by phone, and I didn’t want to pay the high daily convenience fee for a transponder in the car. We briefly considered buying an EZ-Pass transponder in Delaware, but few places sold them. Budget offered a better way. A fixed $95 cost for all of the tolls we encountered with no limit. I’m still leery that it will all work, because the car we were given had no transponder and is supposed to work through license plate recognition.

State-run rest sites with food, gas and bathrooms don’t seem to have recovered since Covid struck. Especially depressing were the rest areas on the NJ Turnpike where we typically found just one of three fast food restaurants open, understaffed and with huge lines.

Our trip back was on United through Chicago from Rochester NY. A day earlier I needed to make a change in my reservations and, even with elite status, it took 30 minutes to reach customer service. These companies really do not want to talk with you and go out of their way to make it painful to reach a real person. While it’s costly, I think it’s a huge mistake to treat their customers that way. When I complained to a friend, he said it took him two hours to reach Delta.

Once we got to the airport for our flight back home, a few minutes before boarding time flight the United gate agent seemed desperate to find someone to give up their seat for a later flight. She announced boarding would not begin until someone volunteered to take a later flight.

The flight left on time, but the WiFi never worked. I had purchased what I thought was an all-day WiFi pass for $12 on the first flight, but it was useless for most of the day. I also experienced United’s vastly improved app and their big improvement in their messaging us with useful information leading up to flight time. In addition to an email to alert me to check in, I received notices about the departure gate, gate changes, and a reminder to buy food before boarding.

They say flying is a godsend. Saves days of traveling. But it’s too big of a hassle. You’re on your own with no support and too high a level of unreliably. I don’t miss flying a bit. I’d much rather do driving trips.