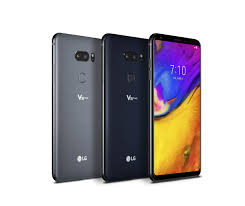 Smartphones have matured to a point where it’s difficult to keep track of new models and the differences between their predecessors and their competition. While there are two main competitors for all practical purposes, Apple and Samsung, sometimes another model comes along that betters its competition. In this case it’s LG’s latest phone, the LG V35 ThinQ.

I recently have been using a beautiful, thin, black LG V35 ThinQ offered exclusively* by AT&T ($900) and found the phone to be comparable in all respects to the iPhone X that I use and the Samsung S9, the company’s flagship model, that I have tried.

Among all of the phones I’ve used and tested, LG’s best models consistently stand out for their superior audio quality. LG is the only major brand that incorporates advance electronics that plays high resolution music without compressing to a lower quality format. LG phones, including this new model, contain high quality DACs (digital to audio converters) that play 192kbps/24-bit, the high-res standard that comes closest to vinyl. That’s more than four times better than other phones, such as the iPhone, that plays back at 44/16. This means if you download or store on the LG high-res files they play without compromise.

To get similar quality from an iPhone, Samsung, or any other brand, you need to use an external DAC that plugs into the Lightening or USB port and pay $100-$250 or more to get similar performance.

High-res is the wave of the future. While phone manufacturers have been working on creating better cameras, only LG has done the same with audio. I tested the audio by copying several high-res albums to the phone’s microSD removable storage and listened using quality Grado headphones plugged into the phone’s audio jack (yes, it still has one!). The results were stunning.  Compared to my iPhone X, the sound was much fuller, more detained, and had better spaciousness. When other phones limit their audio quality to 44/16 (CD quality), they remove 75% of the data that makes the playback flatter and more like listening to a radio.

The benefit of this feature will become even more apparent as high-resolution music streaming becomes more prevalent later this year.

Beyond its audio quality, the phone is every bit as capable as the iPhone X and Samsung S9. It has a similar profile and construction –  an aluminum frame and glass front and rear. It has a beautiful 6-inch OLED display, Qualcomm’s fastest processor, is waterproof, and has a fingerprint sensor/on/off button on the rear of the phone. I especially liked the larger battery that typically lasted ntwo days between charging.

This is a great phone and for those into quality audio. It, along with some of the LG models, provide the only real choice for a self-contained quality audio player.