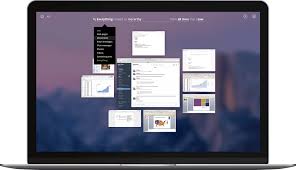 It’s that time of year when we try to become organized to make our life more orderly. That’s particularly true with computing. We waste a lot of time searching for saved files, old emails, an attachment, or a website that we went to a few days earlier.

Well, our memory just got a huge boost from a software product called Atlas Recallfrom Atlas Informatics of Seattle, Wash. It promises to help solve these problems, made worse as our memory grows less reliable and our clutter increases. The software, now in beta for the Mac, is free. A Windows version is promised soon.

The premise of Atlas Recall is to keep track of everything we do on our computer. It does this by working in the background, unbeknownst to us, capturing screen images along with the pertinent data. Then, when we want to recall something, we can type a few words and up comes an array of small windows on our screen, displaying what matches. Each window is a small image of the computer screen that was automatically remembered.

You can move your cursor across these windows to enlarge them, and when you see the one you were searching for, a website, email or whatever, you can click to open the window to the full screen and it takes you back to where you were.

You can also refine your search by selecting a date range or type of file. You can access Atlas Recall in any of three ways so it’s always at your fingertips: by tapping its icon on the top of the screen, going to the app in the dock, or using a window that shows up on the right side of your browser window.

What makes Atlas so useful, is that you view the screen images rather than a list of text results, helping your recollection of what you were looking for.

Atlas, being in beta, still has some limitations. It has a few bugs that provided an occasional notification to upgrade when not needed, and it can’t search inside many documents, such as a PowerPoint presentation.

But it proved so valuable that it actually lessened frustration and gave me the ability to retrieve information across disparate apps easily. For example, I was researching the purchase of a printer and went to numerous sites to read the reviews for various models. I later went back to search for a particular model and it brought up a dozen windows for that printer from sites I had read, discussion forums I perused, and prices on Amazon and Best Buy.

In another case, I searched for the name of a person I was speaking with on a call and up came his email, contact info, and several documents he sent.

The company also makes a free app for iOS, and I tried it on my iPhone. It doesn’t do independent searches on your iPhone; instead, it lets you access what you’ve been doing on your Mac and open the window on your phone.

There’s also a feature that lets you pause Atlas for a predetermined length of time (30, 60 and 90 minutes) when you don’t want to have it record certain sites you plan to navigate to, such as banking or something more risqué. If you forget to do this, you can remove an item later.

In addition to turning it off,  you can choose certain sites not to record. But because using Atlas Recall is so automatic, it’s likely you will forget it’s running and not bother to create an ongoing list of sites to avoid.

One of the issues that may give some pause, and something the company makes clear, is that the automatic recording of your computer activity is not stored on your computer, but on the company’s servers, fully encrypted. The company emphasizes that you’re in control of what information it collects and you can delete your Atlas Recall account and data at anytime. The company promises to protect your privacy, and they won’t sell or rent it.

Atlas Recall has been a big help with my productivity and in eliminating that question, “Where is that information I saw earlier?” It’s a powerful tool that works well.