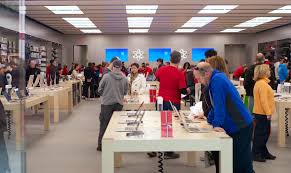 Computers and smartphones are complex devices. When you choose to buy one, one of the most important considerations is being able to keep them working and get them repaired without giving them up for days or weeks while shipped back to the company. The first company to realize this and to do something about it is Apple. Its network of stores and on-line support structure is second to none. While their products are as reliable as any brand, they know problems occur due to their complexity and wear and tear. We carry a smartphone everywhere we go. The product gets banged up, dropped and even abused. And we can’t afford to have it out of commission while it’s sent in for repair.

I was reminded of this yesterday when I noticed my iPhone 6 seemed to be bent. The phone actually rocked when put on my desk. I could not imagine how this could have happened as I keep the phone in a battery case that adds rigidity to the phone.

That’s when I entered the “Apple Support World”. I called their toll free number and after a short wait was speaking to a live, intelligent and caring individual located in Georgia. I explained the problem and she came back telling me that the phone was out of warranty, being 3 years old.

I pushed back, explaining how careful I treat my phone, have many other Apple products, and would not expect them to repair a product that I abused. I also noted that from searching on-line, this is a common problem, attributable by the phone’s design. In the effort to make it so thin, the housing apparently was too thin and weak. In fact, the 6s incorporated some improvements to improve the rigidity.

The agent then elevated the issue, and I soon was speaking with another support person, Erica. After listening carefully to my problem, she checked my account, recognized I have been a customer for years and own a lot of Apple products.

Erica then said, “I am taking ownership of your problem, and I will get your phone fixed at no cost to you.” She gave me her name, phone number and email, in case I needed to contact her again.

She directed me to a nearby Apple store and said she would call me after I had a chance to visit it. She said they will know to repair or replace the phone, because she was putting this information into my record that they would see when I visited the store.

While I couldn’t get an appointment for a few days at any of the nearby stores, I went to the Carlsbad, CA store and signed up for a walk-in appointment. They said It would be a 2 hour wait, and they would text me 20 minutes before. An hour later I received a text that they were running ahead of schedule and to come in in a few minutes.

Back in, another short wait, and I was in the hands of a Genius bar employee who looked at the phone and immediately replaced it, We ran into a problem when restoring the new phone, but the technician figured out the problem and soon I was on my way home.

It’s one thing for a company to provide such good service, but it’s a huge effort to create this support structure that works so well together, The on-line support, the Apple stores, the equipment to diagnose, and the personnel to make things right. In any comparison of product costs, the support behind it is one of the most important features. In my case it was worth hundreds of dollars.

While waiting in the store, I had a chance to watch dozens of people come in with broken phones, iPads and computers. Every single one was greeted by polite employees, signed in and eventually provided service. The employees to a fault were respectful, helpful, explained carefully what they found, and in most cases sent them on their way after addressing their problems. In a few cases they were asked to leave their product for an hour or two to be fixed, or on a rare occasionally given the bad news that something more serious needed to be done requiring leaving the computer for a few days.

While we buy an Apple product for its design and features, it’s their support structure that is equally important and keeps us an Apple customer.  No company in this business comes close.

Contrasting Apple with Microsoft, last week I was invited to a Microsoft Store “opening” in the Fashion Valley shopping center in San Diego. In fact, it was the relocation and reopening of their store from the first floor to the second floor into a smaller space. When I asked about this they said they wanted a “more intimate” location. So much for the spin. Their former location was a few doors from the Apple store and it was evident each time you walked passed the two stores, one was always filled and the other was nearly empty of customers.

The new store was equally well appointed and filled with knowledgeable employees. But it was not the place equipped to service your product. It was a showcase of products from dozens of suppliers of mostly computers. Simply an electronics retailer focused on Windows computers and accessories.