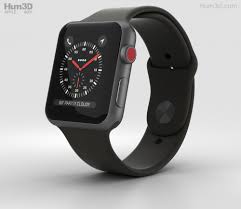 Apple has brought out a new model of its Watch, called Series 3. It replaces Series 2, while Series 1 is still available. The benefits of Series 3 is a longer battery life, faster performance, water resistance, and built in GPS. One version of Series 3 adds cellular capability.

The new Series 3 is a huge improvement from the original model when it comes to battery life and usability. But it still is not always intuitive to use. Some apps show up on the watch but not others. It’s not clear how it decides what appears on the swipe down list. But often it does a good job, displaying player controls while listening to a Podcast in your car and using its vibration to alert you of turns from your GPS (Apple Maps only).

Physically the watch is nearly identical. Same design, a rectangle with curved edges.The base model has a glass crystal and aluminum body for the base model and the premium model uses a man-made sapphire crystal and steel body.

The big disappointment to me was how easily the crystal became scuffed and scratched. And any attempts to polish out the scratches with a cloth used for cleaning glasses with soap, removes the coating on the glass.  I’m a watch collector and have had watches of all prices and materials, but have never experienced anything as fragile as the Apple Watch’s crystal. Yes, you can buy  a sturdier version with a sapphire crystal, but it’s almost twice the price.

I tested the Series 3 model with cellular and found it to be occasionally useful, but not worth the $10 per month your carrier will charge. In fact, having to deal with my carrier on this product is a good reason for avoiding it.

That’s likely done on purpose, because Verizon wants you to call them so they can talk you out of anything that reduces what you pay each month. But it took me almost 2 hours to solve this issue, having to explain several times that I didn’t want the service. Verizon makes it easy to add the watch, but nearly impossible to remove it.

So if you still are interested in an Apple Watch, skip the carrier. Verizon show’s once more  how they can take innovation from Apple and screw it up. Remember when they charged for sending pictures on the iPhone? The benefit of the watch is useful to have as an emergency button at your disposal or receive calls when your phone is out of reach.

As to the value of the watch, it’s great for seeing your upcoming appointments, notifications and who may have texted or emailed you, but without being able to access all of the content. It reminds you to stand up, but doesn’t track your activities quite as simply as a basic Fitbit does.  It’s a nice-to-have product, but certainly not something we need. Think of it as another accessory for your iPhone, a little more valuable than a case, but not something that’s going to simplify or improve your life, particularly since it forces you to interact with your carrier. In some ways it complicates your life a little more, providing more ways to see the same information, but also requiring more maintenance to setup, charge and unlock every time you strap it to your wrist. And then there’s that $10/month extra charge or $120/year that goes on forever.

With that said, the Watch is extremely popular and has been a big success for Apple. In the last quarter Apple sold more watches than the entire Swiss watch industry.

The basic watch in aluminum and glass costs $360 for the large size ($330 for the slightly smaller size) and the cellular adds $80.  If you want stainless steel and sapphire crystal that’s $290 more.

The watch is sold at its suggested retail price everywhere and discounts are currently unavailable except for Series 2 leftovers and occasionally at 15% off on Apple’s and others’s sites, selling refurbished merchandise. Apple guarantees apply only to their refurbished units.

However, there is a way to save about 20%. Kohl’s provides 20% back on purchases in Kohl’s Cash a couple of times each month and lets you spend that cash at another time during the month, as a way to get you back in the store. The watches are available at a limited number of their stores or from their website. They sell a variety of the basic models of Series 3 with and without cellular.

If you’re still uncertain, Fitbit has just introduced a new model that looks similar to the Apple watch for $199 that’s due out next month.