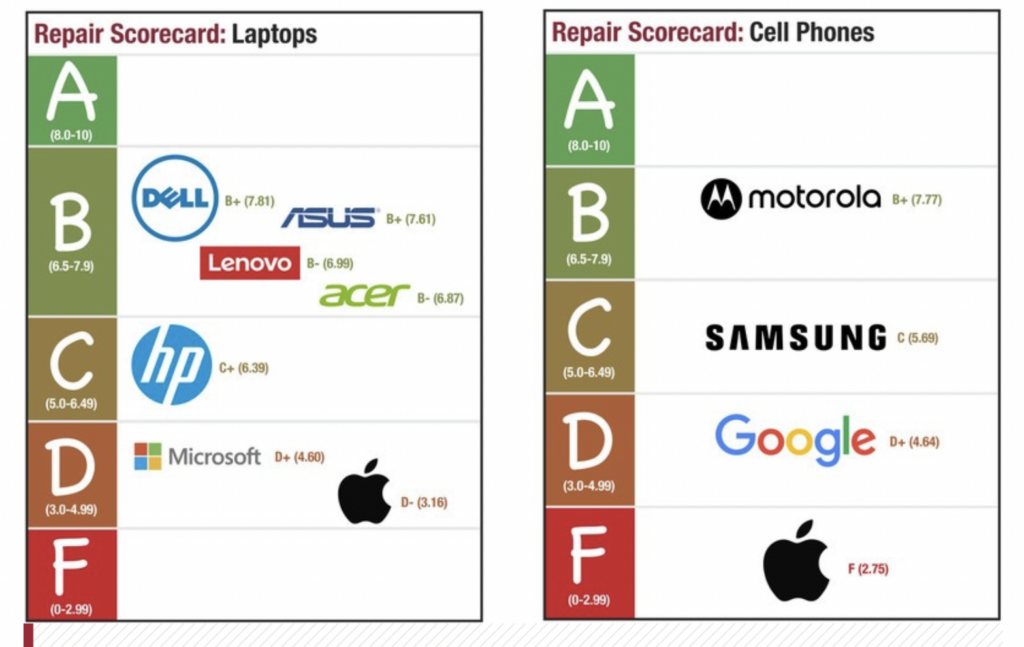 Apple ranks at the bottom of a recent analysis of product repairability, earning a 3 out of 10. The analysis, conducted by the U.S. Public Interest Research Group, rated companies producing laptops and cellphones. They looked at how well their products were designed to be repaired and whether the companies supported right to repair policies by making tools and information available to indeopendent repair shops.

So, why is Apple so much worse? It’s not that Apple’s design engineers are any less capable than those working at the other companies. It comes down to the product philosophy of each company. Apple has always prioritized its products’ industrial design and appearance over repairability and even at times, performance and reliability. In recent years, they’ve had an obsession on thinness over functionality. With each iteration they tried to make the product thinner than the last.

That means prioritizing looks over using design details that help repairability, such as using screws to attach the components together. Instead, Apple makes heavy use of glue and adhesives, which makes the products impossible to disassemble to fix, as well as more difficult to recycle – where the assemblies need to be seperated into their individual elements. In recent years, Apple took this to the extreme as I’ve previously written here, most noteably creating terrible reliability problems with their keyboards.

Because Apple has been the leader and trend setter, it’s also contributed to others in the industry following their lead. Microsoft created a line of Surface laptops that emulated many of Apple’s design approaches, landing them next to Apple at the bottom of the ratings.

In spite of Apple making their products difficult to repair, they’ve also made them relatively easy to service and get your product back quickly. If you live near an Apple store, it’s easy to get your product diagnosed and, if it needs service, leave it there and pick it up, usually within a week, with Apple managing the shipping to one of its repair hubs. If you’re not near an Apple store, they’ll send you a shipping box and provide quick turnaround. While I have no personal experience, many of the other computer companies have a reputation of taking much longer to fix and return a defective product.

But because of its design approach, Apple often needs to replace a major portion of the computer or phone, rather than replacing just the defective part, raising the cost of the repair. When I had a keyboard replaced in my early 12-inch Macbook, they also had to replace the entire circuit board, processor and battery that was a part of the lower case assembly. That meant a few sticky keys that could have been replaced for a few cents, instead, resulted in a $500 repair bill.

Apple’s focus on designing a product not only makes for a more difficult and more expensive repair, it also impacts the enviroment. It requires the manufacture of more parts and adds to the landfill of expired parts that are much more difficult to disassemble and recycle.

Apple has also been a laggard in allowing others to repair its products. It has fought the rights of independent companies to repair their products by not making available the special tools and repair instructions. Now somes states are enacting laws requiring electronic manufacturers to make all of this available and there is national legislation as well.

Consumer and government pressure has resulted in a change of policy by Apple. In November 2021, Apple announced a new self-repair service that allows customers who are “comfortable with completing their own repairs access to Apple genuine parts and tools,” the company said. The service was available first for iPhone 12 and iPhone 13 products with plans to offer parts and tools for certain Mac computers this year. The initial phase of the program, the company said, would focus on commonly serviced modules like iPhone displays, batteries, and cameras.

Now that they’ve address this issue, it’s time for them to make their products much easier to repair. A well-designed product is one that works reliably, is attractive, and reduces its impact on the environment. Apple could lead in all three areas instead of just one if they really wanted to.