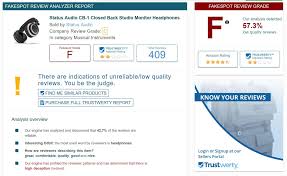 As a frequent purchaser of electronic accessories and hardware devices from Amazon, I’ve experienced more disappointment with my purchases over the past year. Many of these products are sold by Chinese manufacturers that have found Amazon to be a great way to bypass the retailers and offer their products at a lower cost. With all the competition for attention, especially among similar products, these manufacturers have figured out that the best way to differentiate their products are to have the highest ratings and lots of reviews. And that’s led to big problem: an epidemic of fake reviews. In a half dozen products purchased over the past month, I’ve returned three of them for being shoddy or not as represented.

In retrospect, with a little effort these misleading reviews can be detected. They’re often written with poor grammar, are short, and many posted around the same dates.

Here are a few examples of the reviews for a small, portable Apple Watch charger that I purchased. I checked these reviews more carefully after buying, initially accepting the 4-star review. But when I received the product and saw how poorly it worked – heating up the watch and having a fragile connector, I went back and discovered these:

Verified Purchase
This is the best product that solves my problem of charging my watch. It’s portable and can fit in my pocket. It looks delicate and of good quality, which makes me think it is made by apple. This is a lovely wireless charger that charges the watch perfectly. Definitely worth it.
2 people found this helpful

Verified Purchase
I like how compact it is, but be warned, I thought this was a totally wireless charger. Meaning that you could charge using just the charger. It’s a charger you need to plug into a USB. Works great though.

Verified Purchase
The charging is very good, and the watch does not burn. It’s used in the office, and it’s original at home. Good, good, trustworthy

I then discovered fakespot.com, a utility that analyzes reviews on Amazon and a few other sites, including Trip Advisor.  Facespot determines how many are fake, how many have been removed, and provides a revised rating of the product.

To use, you just paste the product’s link into the website or phone app and it conducts an analysis.

For this charger product, it came up with this assessment.

The site also gave an F rating to the company and provided a selection of higher rated alternative products.

I examined another twenty products ranging from cables to battery charges to hardware items. Many fake reviews were founded in a majority of the products I checked. Sometimes more than half were fake.

For example, this DeWalt Drill bit set has 1739 ratings averaging 4.5 stars. Fakespot analyzed the reviews and came up with a D rating and these comments:

This pattern is repeated on product after product, particularly those that are being sold at prices too good to believe.

Fakespot can be accessed many ways, including its website, an app, and as a browser extension. Fakespot originally focused its algorithms on Amazon, but later added TripAdvisor, Walmart, Best Buy, and Yelp support. The company found that over 50 percent of the Walmart reviews were “unauthentic and unreliable,” while it found Best Buy ratings to have less than 5% fake reviews.

I also tried ReviewMeta, an Amazon-only analyzer. It removes the suspicious reviews and adjusts the rating score. For the watch charger, it returned a 4-star review. I tried it on several other products and, while it provided more data, it tended to be less harsh than fakespot.

When I checked other products on Amazon that were from well known brands and were higher priced, the reviews were more reliable. But clearly Amazon, a company that its users have come to rely on reviews more than most to make decisions between similar products, has a big problem on their hands. Amazon may be weeding out many of the bad reviews, as evidenced by some of the analyses from fakespot. But so many remain that are detectable by sites such as fakespot, they can and should be doing much more. It affects customer trust of the site and adds to the company’s cost of returns.

The problem is that so many are trying to game their system. For example, if Amazon banned a company’s products that had fake reviews, you can be sure a competitor would start writing fake reviews to that site.  For now I recommend using fakespot as another check before purchasing.