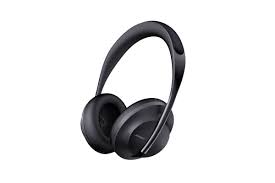 ANC stands for active noise reduction, a technology that Bose has dominated for a decade. Their popular QC35 headphones incorporated this technology to reduce the background noise, particularly the repetitive droning hum that you experience on airplanes. While there were a number of low cost Chinese copies, Bose’s technology led the field.

But two years ago Sony came out with their WH1000XM1 ANC Bluetooth wireless headphones that finally matched Bose; some even think they’re better. Over the past two years Sony made improvements to this model and are now selling version three, WH1000XM3 at $350. This product had been pitted against the Bose QC35 II. On July 1 Bose began shipping their newest model, the NC700 ($400), attempting to take back the lead from Sony. With great fanfare the product began shipping and reviews have been appearing on many of the commerce, tech blogs, and audio sites.

So what’s the verdict? The headphones get very good reviews, particularly for their sleek design and their effective use for phone conversations in loud environments. Its noise cancellation is better than its predecessor and, from my own comparison, is more versatile and effective than the Sony. It has 11 levels that provide an ability to allow you to hear the environment around you at varying levels. As to audio quality, I found it to be a bit better than Sony. The Sony is muddier, more bass, and the sound less precise. (Neither can compare to the audio quality I experienced with a B&O H9i headphone I had on loan a few months ago.)

But that’s not the full story. Bose has introduced an app, Bose Music, that is needed to control and access many of the features and adjustments for its new headphone. It’s also used to pair your headphone to your phone and to update the firmware in the headphones. When I used it, it paired the phone the first time, but then stopped working, and in spite of dozens of attempt, does not recognize the headphones.  In addition, the app requires you to sign in each time you open it. Imagine needing to sign in to use your headphone!

As a result, the reviews on Amazon and Bose’s own website rate the headphone at an average of 3 to 3 1/2 stars out of 5, mostly because of the app. And on Apple’s IOS store, the reviews of the Bose Music app from those with the NC700 headphones are full of ratings of 1 out of 5, the lowest possible rating. Customers are showing anger about how bad  the app is and how it prevents them from using their new $400 headphones.  Many report that they are returning their headphones as a result.

It’s really is baffling that Bose could stumble so badly. It’s a huge embarrassment to a company known for its hardware. But for some reason they thought they needed an app. Even more baffling is they should have anticipated the blowback from their own testing, yet they decided to release the product anyway.

This is an example of how big companies can become complacent from their position of strength, and that decisions are often made, not as to what’s best for the customer, but what’s best for their own short term profits. Bose has tarnished its reputation and that of an important new product that will be hard to shed, leaving a very bad taste among some of their most dedicated customers.