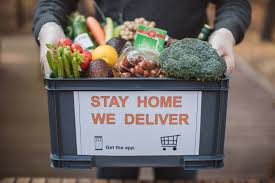 App-based products and services that one seemed silly are now becoming important in this age of Covid-19. As a tech reviewer and technology prognosticator, I had been dismissive of several of them until I began isolating at home.

I once dismissed the value of grocery-shopping services for the masses. Sure, they were helpful for those confined to home by illness or lack of mobility, but don’t most of us prefer to pick our own fruits and vegetables? Early attempts at home shopping services struggled, but now they’ve become mainstream.

They’ve become vital if you want to avoid contact with strangers while shopping. I now use Instacart once or twice a week to shop Costco and several grocery stores in my area. It’s a well-designed app and service that allows you to create a shopping list and communicate by text with a real shopper working on your behalf. The biggest issue had been scheduling a time for delivery after completing your shopping list, often facing no available appointments or week-long delays. But that’s improved and deliveries are usually available within a day or two of placing your order.

Still, there are issues with the supermarkets showing items available that are out of stock. One workaround is to communicate with the shopper while they’re shopping and ask them to look for the out of stock items. About half the time they’ve found them. Whole Foods has their own delivery service, but in my experience they’ve been less reliable than Instacart with more items out of stock and they don’t let you add items after you pay for your order.

We used restaurant delivery services in the past, perhaps once every month or two, and now that’s become a regular occurrence for many confined to home. They’re also a way to help restaurants survive the restrictions on dining in. There still are issues with these services, such as another person handling your food, the high costs some of the services are charging the restaurants (30% or more), and companies such as GrubHub (which I avoid) charging restaurants exorbitant fees.

As noted on TheVerge, “Grubhub’s unsavory business practices (include) —  using misleading websites and phone numbers in order to charge burdensome, even predatory fees, or setting up websites for restaurants that aren’t even on its platform . (It has a) poor reputation for using deceitful practices to take advantage of the restaurants. ” Grubhub sounds more like an organized crime outfit!

More often now I’ll arrange a restaurant pickup where the food is placed in your trunk when you arrive. It helps your local restaurant avoid these fees and is nearly as convenient as delivery.

Another service that has popped up has been curbside delivery at retailers. While rarely heard of before, it’s become a great solution, and is something that I hope remains in place after the isolation. It’s a way for retailers to better compete with Amazon and a reversal of what was common before the virus: shopping the physical stores and ordering on Amazon. Now we can shop on Amazon and order from the stores and have the products the same day while supporting our local community.

I tried that with my local Target and Best Buy. store. Order and pay on-line and specify your local store for pickup. You get a text notification a few minutes later with a delivery window of a few days. Drive to the designated area near the store and push a button on your phone to let them know you’ve arrived. A few minutes later the item is put into your trunk. All done seamlessly and touchfree.

I’m also subscribing to many new services I used to get for free because of how much I use them. Now that we zoom a lot I’m paying $15/mo to extend my calls beyond the 40 minute limit. And we subscribed to UberConference for a similar reason. One of the benefits of UberConference’s subscription is everyone can call in using a single phone number with no code to enter. That’s particularly useful for the technically challenged relatives!

I also began using Stamps.com to create paid shipping labels for packages I need to send out. I use USPS most of the time, and with a prepaid label, I don’t need to wait in line at the Post Office, and my cost is quite a bit less.

While I try to shop locally for big items – it’s easier to return them – Amazon has become even more vital with their delivery of most anything. When our Microwave failed I needed a specific fuse that was at my doorstep 15 hours later.

And of course, we need to be thankful for all fo the streaming video services. The challenge isn’t finding something to entertain us, it’s figuring out what’s worthwhile and on which service it can be found.

For the most part, technology is serving us well during these difficult times and is allowing us to cope with the challenges of self-isolation. Who would have thought?