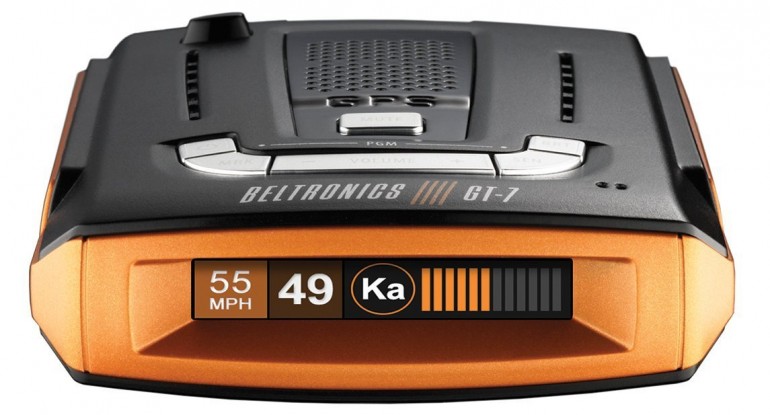 With all of the technology advances taking place, just how good are today’s radar detectors? The devices that attach to our car’s windshield were once were commonly used to detect police hiding along the side of the road trying to catch us speeding by. It became a back and forth game with police adding more powerful radar guns that used different frequencies and technologies, and detectors adding new capabilities. Many, including me, stopped using them many years ago, because there were too many false positives. And some states, including Connecticut and Virginia, outlawed their use.

But with the advancement of technology in most all of our products., I thought I’d see how well today’s detectors perform and what new things they could do. I tested the $500 Beltronics GT-7 Radar Detector, the company’s top of the line product. Beltronics and Escort, the brand I used to use, are now the same company. (The GT-7 is similar to the Escort Passport Max.)

Clearly, the detectors have come a long way. The GT-7 has an appealing masculine design in copper and black with a color OLED display. It comes with a suction-cup windshield mount and a coiled-cord with a mute control that plugs into a 12-volt receptacle. The detector easily slides on and off the mount and is held in place with a magnet.

Today’s ticket threats go well beyond speeding and now include red-light cameras, fixed-radar guns, and planes patrolling stretches of highways overhead. Newer detectors like the GT-7 are better able to contend with both these old and new threats.

New digital electronics and signal processing allows the detectors to decipher and detect radar guns at greater distances, better discern false alarms, and cover all of the newer bands being used. Some detectors, such as the GT-7, also have a built-in GPS chip, not for providing directions, but to determine your location.

By continuously comparing where you are to the locations of red-light cameras, fixed radar and other non-mobile traps, stored by location in its memory, it can alert you when approaching the trap. (The database can be kept updated by attaching your detector to a computer with a USB cable.)

The GPS is also used to reduce false alarms, one of the real annoyances of radar detectors. These alerts are caused by electronic signals, such as electronic door openers, and other radio emitting devices, using a similar frequency as the radar guns. The GPS aids in learning your driving patterns and identifying the false alerts that you encounter in the same place on the same routes day after day.  It enters them into memory and will then squelch the alarm as you pass by again. The company won’t divulge exactly how it works or how many times it takes to eliminate a false alarm, but in my testing, the alarms went away after 3 or 4 passes.  (You can also enter false alerts manually).

The detector also displays the posted speed limit and alerts you if you exceed it or another speed that you set.  The GT-7 is fully programmable, allowing you to select either a simple or advanced mode, and chose which alerts you would like and their volume. It also has voice alerts in English or Spanish to warn you when approaching these threats, such as,”Red Light camera ahead”.

After a month of use, I found that the detector did a good job, particularly in providing audio warnings of red-light cameras while traveling in urban areas. It makes you realize how many there are. Considering that I was caught last year by a red-light camera, passing through the intersection just as the light turned yellow, I’ve always been extra careful when encountering them. These cameras seem to be the most pernicious tools being used today. They issue tickets automatically, with some cities receiving the equipment at no cost from private companies in return for a cut of the ticket revenues.

I still encountered a number of false alerts, which I found to be more annoying than in the past, because we now use our phone while driving. They generally occurred when traveling into new areas where the detector had no opportunity to learn. You can suppress the alert by pressing a button on the cord plug or detector, but neither was in easy reach in my installation.

With a special optional power cord ($99) and a free app, Escort Live, the detector can be connected by Bluetooth and network with other users to provide real time updates of speed traps.

It’s similar to the way Waze, the free traffic app, works. Waze provides accurate traffic data as well as locations of police, accidents, and other obstacles by using crowdsourcing, where information is submitted by other Waze users. Similarly, the data that other detector owners find, such as speed traps and cameras, are automatically updated in your detector.

So, yes, radar detectors have come a long way, and can alert us to a lot more than just radar guns. With high ticket costs and their impact on insurance rates, a detector can pay for itself in one or two incidents. While some might say they encourage bad driving, I’d counter to say that by making us aware of these traps, we might even drive a little more cautiously. But occasional false alarms still remain an annoyance.