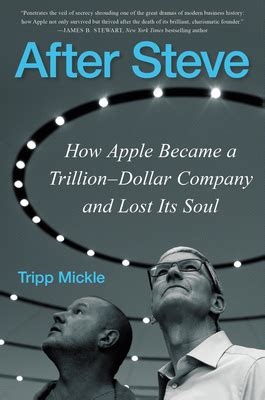 One of the great business stories of our time is the rise of Apple to become the most highly valued company in the world and the inventor of some of the most desirable consumer products ever created. While much of the credit goes to its co-founder, Steve Jobs, the company only reached its height years after Jobs’ death from cancer.

When Jobs passed away most analysts assumed Apple would either fade away or lose its way. After all, that’s what happened to similar companies with a charasmatic leader, such as Polaroid. Both Polaroid and Apple replaced its product-centric CEO/founder with an operations executive, and Polaroid soon went bankrupt.

What happened after Jobs’ death is chronicled in a terrific new book, “After Steve: How Apple Became a Trillion-Dollar Company and Lost its Soul” by Tripp Mickle, a reporter formerly with the Wall St. Journal and now with the New York Times.

Mickle takes us behind the scenes at Apple, thanks to his access to hundreds of sources, to give us particular insight into the company’s two main players, Tim Cook, the CEO successor to Jobs, and Jony Ive, the industrial designer that had collaborated with Jobs to bring the company back from near bankruptcy by creating a number of new products. Ive now must work with Cook, who is an operations expert and not a product person. Both are under intense pressure by Wall Street to come up with a new product after the iPhone, which dominated sales for years but has begun to fade.

Mickle provides great insight into both Ive and Cook, tracing them from their school years throught their early careers, to their years at Apple and then working together. Ive is highly focused on every little detail of his products, very self-critical, and not particularly tolerant of those that get in his way of creating his definition of “perfection.” Cook is a numbers person, has little product sense, and no product design experience in a company dominated by its products.

The new product that the financial community is demanding is developed by Ive with Cook showing passing interest. That product, the Apple watch, comes to market, but fails to meet sales expectations, in spite of Ive hyping it around the world as a fashion item. Meanwhile Cook faces challenges that threaten Apple’s viability, including the increasing hostile US-China relationship and Trump’s threat to add a 25% tax to Apple’s products being made in China.

Having worked at Apple and with Ive when he first arrived at Apple, I was particularly fascinated by Mickle’s details of the company’s design activities and personal relationships, written as if he was in all the rooms where it happened. Apple has always pressured its employees, both present and past, not to discuss its inner workings, but somehow Mickle was able to penetrate that wall to create such a riveting book. Apple did not cooperate with the author and reportedly is not happy with the book.

Mickle also give us a look at the huge ten billion dollar “spaceship” headquarters that was designed and built under the direction of Ive. We learn of his meticulous attention to details ,such as sampling leather from around the world for the chairs in the auditorium that eventually cost $15,000 each. And we experience how some employees injured themselves by walking into the nearly invisible windows and doors.

One of the eye openers for me is how Apple managed to come up with its next “killer product,” that was not the watch. It was their service business that was driven by Cook and is major factor in the company’s current growth.

The book gives us a great appreciation for Apple’s success and the business and personal decisions of its executives. It’s not written to expose gossip or inside secrets. It’s a serious story, mesmerizing at times, of the inner workings of Apple, and will be a useful reference in years ahead.