Apple just introduced four new iPhone 12 models, shown in the image below in blue. The major improvement over last year’s models are the inclusion of 5G cellular on all models.  5G promises to speed up data downloads and create the opportunity for new high-bandwidth services such as high resolution music and hi def videos. But most won’t get the benefits of 5G until much more work is done by the cellular companies to build out their networks. At this point 5G is spotty or non-existent. Some testing has even shown it to be inferior to existing 4G networks. Experts expect it to take one to two years before 5G becomes as prevalent as 4G. The best that can be said is that these phones are ready for the future that’s still a long way away.

But Apple’s CEO Tim Cook said none of this, and even had Verizon’s top executive on hand to push the 5G story. They want you to believe 5G is here and now in order to sell their new phones. The charade was best described in a quote from Shira Ovide in the NY TImes:

Along with the new iPhone 12 series, are 3 existing models that will continue to be sold: last year’s iPhone 11, the previous year’s iPhone XR, and the iPhone SE.That provides iPhones at prices from $399 to $999 in their basic memory configuration. A fully loaded iPhone 12 Pro can cost $1400! 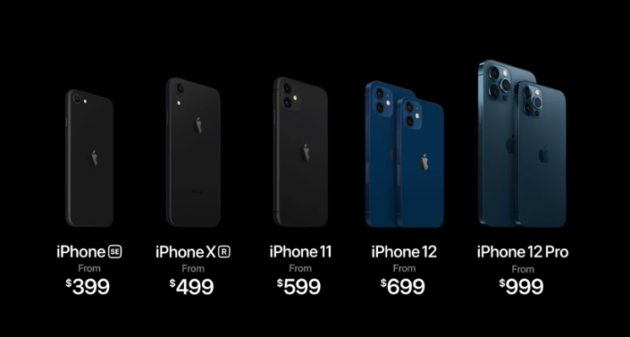 A total of four new iPhone 12 models were announced: Two sizes of model 12 and two premium 12 Pro phones. The first pair has an aluminum frame and the second stainless steel. As in previous years, the new phones are a little faster, come in new colors and have cameras that are slightly better.

So, should you run out and upgrade to one the new iPhone 12 models?

It depends. If you have an iPhone 7, 8 or X in good condition, the benefits are not compelling. They all use the same software and the experience is much the same. But, if you need a phone now, the iPhones are always excellent choices. But buying a 5G phone is not yet compelling. My family members are using an iPhone 6S, 7, and X, and XS, and all are working just fine. All but one has had their batteries replaced by Apple for under a hundred dollars.

While Apple lavished their typical over-the-top praise on the new models, touting their faster processors, a thinner profile, OLED displays, ceramic finishes, and new colors, they said nothing about battery size and battery life, other than that the phones will get through a day.  But for whom? A casual user or a heavy user? Their statement means little without more specifics. For many users, battery life is one of the most important attributes of a phone, but Apple continues to think otherwise and produce phones with some of the lowest capacity batteries in the industry. Apple phones have batteries with 50-70% the capacity of most Samsung phones and half of some Motorola phones that can get up to two days without recharging.

Apple has always put thinness ahead of battery life, and it appears that hasn’t changed with these new even thinner phones. So until we get a tear-down report from iFixit and some battery testing from the reviewers, we won’t know how well these phones do.  I would wait for the results, if battery life is important to you. Some rumors from analysts have indicated that the batteries in these phones may have an even lower capacity than the current models, although that could be negated by the new processors with lower power consumption.

How often you need to recharge your phone not only effects convenience, but also battery life. The more times you recharge, the shorter the battery life and the sooner you’ll need to replace the battery. That’s because a battery will lose 20-30% of its original capacity after about 300-400 full cycles, regardless of its size. The battery indicator on iPhones recommend replacing the battery when its max capacity falls to 80% or less. The bigger the battery the fewer cycles are needed and the longer it lasts.

The other announcement from the Apple event that’s received a lot of attention is that the new iPhones no longer come with a charger or earbuds. Apple made a huge deal of this, positioning it as a benefit to the environment by not including them and encouraging us to use our existing ones.

So, taking all this into account, my recommendation on buying a new iPhone is the same as my recommendation about buying a new Apple Watch Series 6 in my column a few weeks ago: these products have reached a point where it’s hard to make a significant improvement over last year’s models. They all work much the same.  In addition, many of us are realizing that the better pro-environmental decision is not to buy a new phone at all. That’s a better for the environment and your pocketbook.