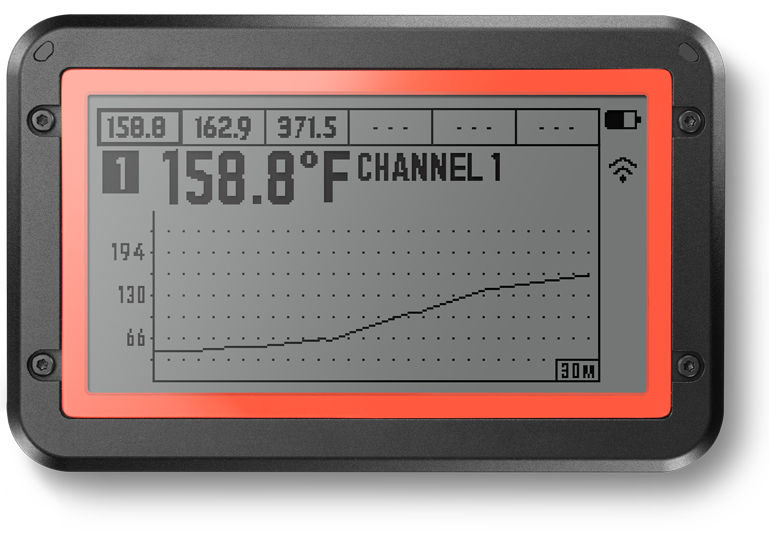 While I love covering travel technology, few of us are traveling these days and there’s little interest in new luggage from Tumi or Away. It’s much more likely we’ll be touring our home than touring another city. So rather than writing about travel tech, I thought I’d focus on some great gadgets for the home associated with outdoor grilling.  These are all products I’ve been using a lot these days.

One of my loves is barbecuing and smoking meat. I have an assortment of grills, including an old Weber gas grill, a Big Green Egg, a Yoder pellet smoker, and a recent acquisition, a tabletop M16 charcoal grill from M Grills, especially designed to cook steaks at high temp. This is a hobby I’m particularly suited for: I love to eat, I love ribs and steak, and I love gadgets. For those tiring of all the gadgets for your phone or computer, this is an area offering an entirely new opportunity to experience gadgets and gizmos of a different genre.

My favorite gadget that I’ve been using with all my grills is the FireBoard Cloud Connected Thermometer and app. Now, in general, I hate cloud-connected devices with their own app. They’re difficult to set up, occasionally disconnect, and awkward to use. This product is just the opposite.

I’ve been using their original Model 1 and it works flawlessly. I use it to remotely monitor the temperature of the food I’m cooking and the cooking temperature inside the grill. It has six channels that accept up to six temperature probes to measure different meats, different parts of a large roast or brisket or whatever I’m cooking.

Each of the temperatures are displayed as a graph on my phone, iPad, computer, and numerically on my Apple Watch, no matter where I am.  You can add notations and even images to the graphs, describing and capturing the progress of what you’re cooking. Each cooking session starts automatically when you turn the device on, and you can include plenty of notes about your cooking session. The information is stored online and in your devices. It’s a great way to learn from previous sessions.

The company has recently introduced a newer model that has a larger display, but otherwise works the same. The FireBoard 2 costs about $190; the original with a small display might still be found for about $30 less. There are also models that control an external device such as a fan that some use to regulate the fire in a charcoal cooker.

Sous vide is the method of cooking meat or other food in a liquid bath, heated to the same temperature you want the food to finish at.  The food is sealed in a plastic bag before it’s immersed. If you like your steak at 125F (rare) you place the steak in a sealed back into a container full of water heated to 125 for a couple of hours. Before serving you sear the outside of the steak on a hot grille. The entire steak is uniformly cooked with no graduations, but without searing it’s unappetizing beige gray in color. Some like to sous vide to a slightly lower temperature (say 115F) and sear a little longer until the inside reaches 125.

High-end steak houses prepare their steaks in advance this way so that they can go from kitchen to diner in only a few minutes and be assured that it’s accurately prepared. A sous vide immersion heater, used to heat the water, is a cylindrical device that goes into the water. They typically cost a couple of hundred dollars, but I’ve been using the Strata immersion cooker from Monotone that’s a bargain at its regular price of $100, but is now on sale for $68. It’s similar to the Anova and other immersion heaters costing three or four times more. I’ve used it to make steaks, pork chops, chicken breasts, and fish.

Temperature plays a key role in cooking and smoking, as noted above. While some food, notably briskets, are cooked to a level of tenderness, other meats, such as steaks, fish, and chicken, are cooked to a specific temperature for safety and preference. The best way to measure the temp, in addition to the FIreBoard, is with a portable instant read thermometer. It’s able to measure the temperature within 2-3 seconds, and is accurate to a fraction of a degree. Most cooks use both a thermometer to track the cooking and one for instant checks across all of the foods.

The acknowledged leader in this category is the Thermopen from Thermoworks that costs $100, but occasionally is on sale for 25% off.  If you go to their website there’s a warning about not buying on Amazon. While you can rarely find the Thermapen there, occasionally a 3rd party will offer it for twice the price. But what you can find on Amazon are lots of similar products, many that all look like each other, being sold under a variety of names. They are lighter weight than the Thermopen, probably not as well constructed, but do much the same for under $20.

I’ve had to repair two of my Thermapens for $35 each, so they’re not quite as durable as their high cost would imply. As much as I like them, I’ve been using this $18 thermometer from Alpha Grillers that does much the same as the Thermapen.

Smoking meat with burning wood, whether it’s brisket, ribs or roasts, requires cooking at a low temperature for a long time, such as 225F for 6 to 20 hours at a time. Normally that requires constant attention, feeding the fire with chopped wood or briquets, and adjusting the airflow to maintain the low temperature.

Pellet grills automate this process. They use small pieces of compressed wood that can be easily fed in a controlled manner to the fire automatically. Feedback based from the smoker’s temperature varies the rate that the pellets are fed to the fire, maintaining the desired temperature. The smoker now can run for hours essentially unintended. While it may not impart as strong of a smoke flavor, the convenience makes them very popular, bringing restaurant quality BBQ to the home.

Traegar pretty much created the market with products in the $500-$700 range, but there now are many companies, some making more robust, heavy duty units, many with built-in WiFi. Yoder is one of the best alternatives. A Kansas-based manufacturer of heavy duty grills fired by wood and charcoal, their pellet grills are about twice the cost of Traeger grills, but well worth it.

This is such a high growth category, that Weber recently entered the market with two SmokeFire pellet grills, priced around $1000. But, they are not recommended. Unlike their other charcoal and gas grills that have large followings, their pellet grills have been plagued by design and manufacturing defects, leading to grease fires, poor pellet feeding, flameouts, software issues, and sudden shutdowns. The reviews recounting buyers’ experiences have been so troublesome that the CEO recently posted a letter, writing that they would take the reviews down from their site and start over, explaining how much the product has improved after replacing many of the parts.  But that just led to new bad reviews from owners refuting those claims. The products currently get a 2 1/2 star rating on Amazon.