Email has been something we’ve used for years, but works essentially the same way since its invention. Essentially it’s a collection of folders that groups a collection of incoming and outgoing emails. Improvements have included adding folders, including spam and less-important email, and a variety of other incremental features around the edges.

But while email has remained essentially the same, it’s gone from being a great convenience to something that marketers, spammers, and others take advantage of, making it increasingly more cumbersome to use.

I’ve used a variety of email products including Gmail, Apple Mail, Spark, Outlook and others over the year, and they’re all much more alike than different. There’s been little very little innovation in the more than twenty-five years of existence.

That’s why I was attracted to an announcement this week from Hey about their new email product that takes an entirely different approach. It begins with the reasonable and obvious premise that we should only see email that we want to see and not what others force on us.

In their announcement, Hey notes,

“…Email remains a wonder. Thanks to email, people across cultures, continents, countries, cities, and communities communicate every day. It’s reliable. It’s simple. It makes it easy for two humans to share their love, and for millions of people to earn a living.

So good news, the magic’s still there. It’s just obscured — buried under a mess of bad habits and neglect. Some from people, some from machines, a lot from email software.

Email deserves a dust off. A renovation. Modernized for the way we email today. With HEY, we’ve done just that. It’s a redo, a rethink, a simplified, potent reintroduction of email. A fresh start, the way it should be. HEY is our love letter to email, and we’re sending it to you on the Web, Mac, Windows, Linux, iOS, and Android.”

The company does an excellent job in walking us through its entirely new approach, explaining its product in a 37-minute video here.

Hey provides us with a new email address and the tools to determine who can contact us through that address.  When someone emails us for the very first time, they don’t get into our inbox, instead the mail arrives in an area called The Screener. This is where we chose whether we want to hear from them or not. Click Yes and they’re in, No and you’ll never hear from them again. Hey calls it consent-based email, where we are in control.

If you choose Yes, you direct the email to one of three places: The Imbox (important email), The Feed for non-urgent email such as newsletters and subscriptions to news alerts, etc, and lastly The Paper Trail- items such as receipts, reservations, shipping notifications, etc. 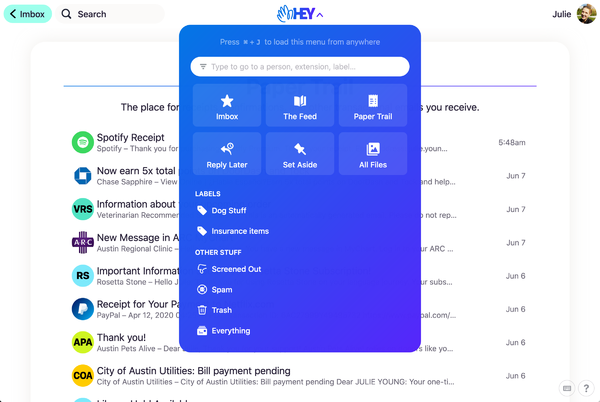 At a later time of your own choosing, you can open The Feed and read the items, not as one email at a time, but as one long feed, much like scrolling through a blog with each email opened and stripped of the non-essential headers. That allows you to get through quickly and digest the information much more efficiently.

When you do review any of your emails in the Imbox you can click a Focus and Reply button among the many options. That will create a miniature pile of emails at the bottom of the screen for reviewing later. And when you do review them, they, too, will appear on a single page, one after another, with a reply box next to each.

I’m just skimming the surface of this innovative product. Other features include a view of thumbnails of all your email attachments, a way to change the title of an email to make it easier to find, and an innovative way to create a single email thread from multiple threads.

The interface is also completely different from your normal email with much less clutter. A pop up menu provides context appropriate actions you can take.

Hey does a terrific job of eliminating the email you never gave permission to be sent, while focusing on the important email when you want, and reviewing less important email much more quickly and easier. In addition it organizes your messages, threads, and attachments that make it much easier to find, organize, and address on your terms.

But it’s a work in progress. We still get emails from some companies we may want to hear from about some things, but not others. And companies send us spam email using different addresses, making categorizing as time-consuming as using your current email.

Hey does require you to start all over with a new email address, which means it will take time for you to notify others to use your new address, for you to begin anew with a new email collection, and leave behind your old repository. But that’s not surprising considering your current email address has been sold and rented thousands of times and appears on tens of thousands of email lists. To get started, you forward your old email address to the Hey address and begin filtering.

The product is available by invitation, meaning you provide your email and you’ll be invited to join shortly thereafter. It offers a free 14-day trial and costs $99 per year.

There is an issue right now with the company’s iOS app for iPhones and iPads that may delay the company’s rollout. Apple is prohibiting the app from being offered in its App Store if the company doesn’t allow the email service to be sold there.

Currently Hey is only available to be purchased from the website, and the app is offered as a free compliment to the web client. Apple’s policy since their app store was created has been to take 30% of all revenue of an app’s sale price, in exchange for curating out bad apps and providing worldwide distribution. (Of course, apps for iOS products are only available on the store and nowhere else.)

Apple’s policy for software with both apps and web clients has been ambiguous. For example, Spotify, Amazon and Netflix don’t sell their services on the app store, because Apple excludes apps that just deliver content: music, books, and videos, Apple says email is not included in this category.

Apple explains it can block an app from its store if the app doesn’t function on its own, as in this case. Essentially Apple has created some very complex and arbitrary rules that app makers must adhere to, because they have no other way to distribute their apps. Essentially, they own the highway and erect the toll booths using their own rules.

This may prove to be a watershed moment as Apple faces anti-trust investigations in Europe and upcoming Congressional hearings about these practices.

A preview of this comes from Rep. David Cicilline (D-RI), who summed up the issue this way:

“Because of the market power that Apple has, it is charging exorbitant rents — highway robbery, basically — bullying people to pay 30 percent or denying access to their market,” said Rep. Cicilline. “It’s crushing small developers who simply can’t survive with those kinds of payments. If there were real competition in this marketplace, this wouldn’t happen.”

This is a battle that Apple cannot win in the long run. Right now they are too arrogant and blinded by their success to realize that.