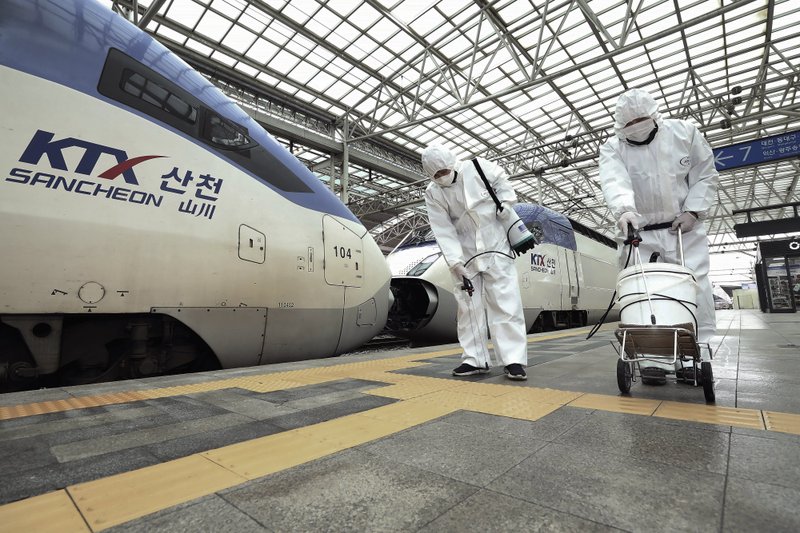 These are the times when we need facts and scientific information to make good decisions. Yet in this political climate there’s so much obfuscation and bad information, it’s hard to know what’s real and what’s not.

It’s clear we can’t depend on our president and many of these around him for accurate information. Today much is political and clear thinking is contaminated with self-serving political interests. But this is a lot worse than other political games. Denial, bad information and bad decisions are going to translate into deaths. When Fox News personalities attribute the Corona virus to a Democratic hoax, people will die. When Rush Limbaugh tells his listeners this virus is like a common cold, people will die. When Trump prevents the CDC from recommending people not fly, people will die.

“Even on Monday, Trump was comparing covid-19 to the ordinary flu, even though its mortality rate appears to be many times higher and its economic effect infinitely greater. New York magazine’s Jonathan Chait is right that Trump is acting like “the mayor in Jaws, blithely ignoring reports of a gigantic shark because he didn’t want to hurt the tourism season.”

“But Trump could not spread disinformation all by himself. A herd of right-wing pseudo-journalists has jumped the shark along with him. They are promulgating narratives so at odds with reality that they are likely to get people killed.”

It’s up to each of us to find trusted sources. Some of the best are ex-government officials that were responsible for health issues in the Bush and Obama administrations, medical doctors/reporters, and reputable news organizations. Also, Apple has just created a dedicated section within its Apple News app that will help readers stay updated on the coronavirus outbreak. It includes informative, fact-based stories from reputable publishers, according to Apple, which are curated by Apple News’ team of editors. Clearly, a much better source than Facebook.

We can predict how this will play out by looking at what’s happening in other countries that are a few weeks or months ahead of us in this outbreak. It shows that things will get much worse before it gets better, and our health facilities and practitioners will be taxed beyond their capabilities. So much so that it could result is some older people being triaged and allowed to die because a scarcity of medical equipment or beds, as is happening now in Italy.

I learned a lot from two graphics that I want to share.

If you’re wondering about traveling on a plane or train, here’s a fascinating story that recently appeared in the South China Morning Post, Hong Kong’s major newspaper.

In this article, research scientists mapped how the virus spread through a bus in China over a period of four hours. Similar results would likely apply to airplanes.

One passenger boarded the bus (as shown in red), and he infected seven others. The article explains how it happened from an analysis of the video taken on the bus. 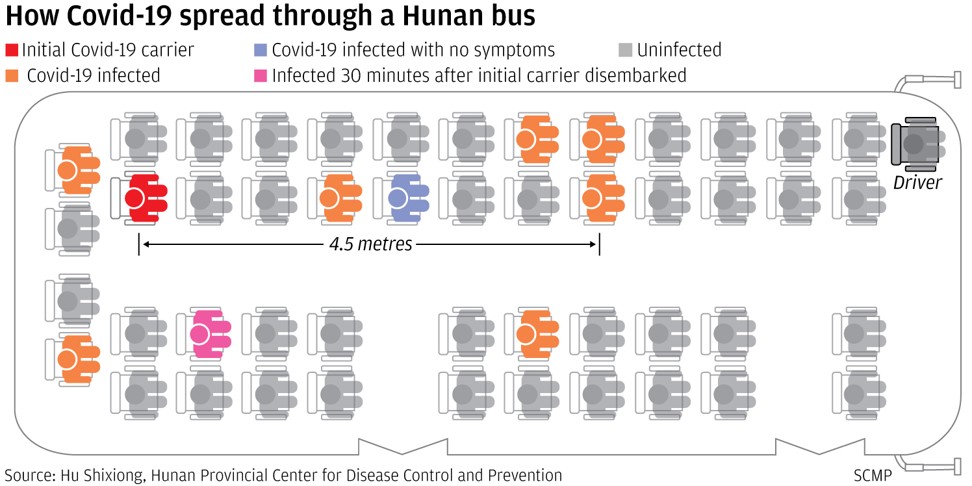 For those of us that travel frequently, we’re getting conflicting advice. My wife and I decided to cancel a cross-country trip next week, a trip that we planned many months ago. We debated, first not wanting to cower with fear and living normally. While we are healthy, we’re in an older group most at risk, and finally decided to cancel. The issue is not just us becoming infected, but infecting friends that may be more susceptible.

But don’t give the airlines or hotels any credit to help us when we are down. When I cancelled my flight on American, they wanted to charge us $150 to rebank the miles we used, in spite of announcing last week that there would be no penalties for canceling your trip during this time.

And isn’t ironic how much criticism some left-leaning politicians get for advocating government solutions for health care, college loan debt, and other afflictions of the middle and lower classes, but how little resistance there is for socialism for the airlines, cruise lines, oil industry and others? These industries are now lining up asking for handouts from the government at the first sign of adversity. The focus of government relief should be on those that are out of work due to health or job reasons, or those that can’t work because their kids’ schools are closed.

Another excellent graphic below provides some clear understand of the impact this virus has on our health system. The goal of distancing ourselves is less to prevent the illness, but to slow it down to enable it to be treated with our finite health resources.

“Flattening the curve means that all the social distancing measures now being deployed in places like Italy and South Korea, and on a smaller scale in places like Seattle and Santa Clara County, California, aren’t so much about preventing illness but rather slowing down the rate at which people get sick.”

Both these graphics make a strong case for reducing contact, avoiding crowded areas and not flying. 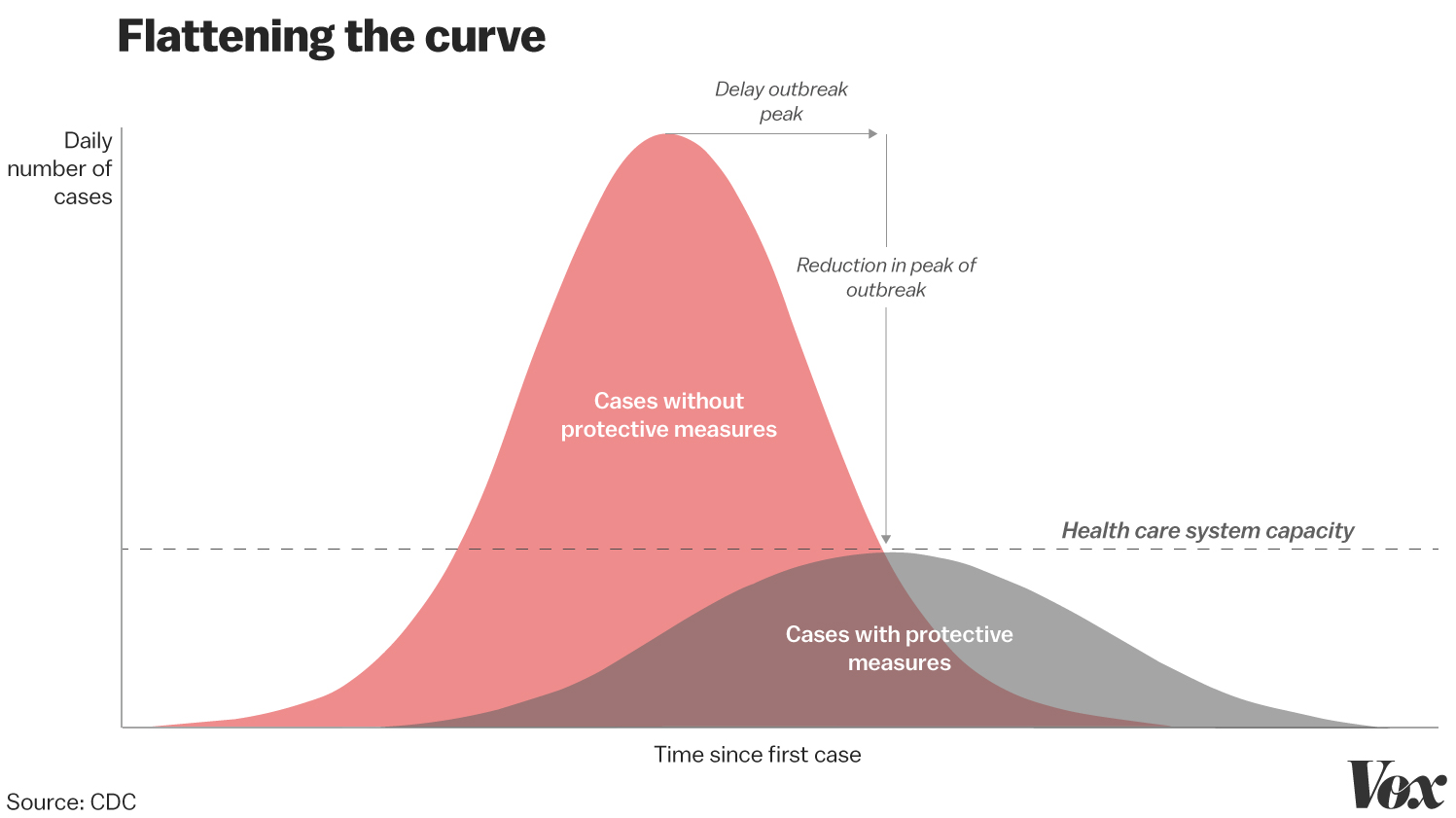 Finally, here are several excellent references to bookmark that provide useful information, the first three from One Medical, a fast-growing primary healthcare provider based in San Francisco with offices in a dozen major cities across the country:

Information on the virus

These facts may help calm your nerves

Advice on extra precautions you can take to minimize your risk.