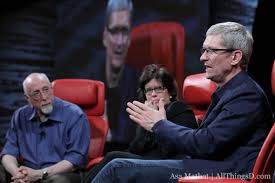 Walt Mossberg, the renowned and highly respected technology columnist for the Wall St. Journal and The Verge, briefly came out of retirement to write an insightful analysis of the past decade of Apple with Tim Cook at the helm. It was a fascinating take – well balanced, knowledgeable, and perceptive, especially considering how supportive his views have been about Apple under Steve Jobs. It’s well worth reading here on The Verge.

Apple has always been of interest to those that love tech hardware such as myself, because it’s been the world leader and has raised the level of hardware design and innovation for appearance, quality and ease of use. Apple’s products in the late 90s set the standard for mechanical fit and finish that was picked up by its competitors and significantly raised the standards of the public’s expectations.

But with Jobs departure due to his illness and death, things have not gone so well and, In that context I want to add to Mossberg’s analysis and expand on several points he wrote relating to Cook’s impact on Apple’s products:

But Cook does bear the responsibility for a series of actions that screwed up the Macintosh for years. The beloved mainstream MacBook Air was ignored for five years. At the other end of the scale, the Mac Pro, the mainstay of professional audio, graphics, and video producers, was first neglected then reissued in 2013 in a way that put form so far ahead of function that it enraged its customer base.

Some insiders think Cook allowed Ive’s design team far too much power and that the balance Jobs was able to strike between the designers and the engineers was gone, at least until Ive left the company earlier this year.

The design-first culture that took root under Cook struck again with the MacBook Pro, yielding new laptops so thin their keyboards were awful and featuring USB-C ports that required sleek Macs to be used with ugly dongles. Apple has only recently retreated back to decent keyboards on the latest MacBook Pro, and it issued a much more promising Mac Pro. But dongles are still a part of the Apple experience across its product lines.

Over the past decade I’ve observed much the same, and have written about it here and on other sites. As someone that’s developed and reviewed products professionally for many decades, I’ve cringed to see so many unforced errors. Finding and criticizing was not fun, but Apple brought it on by the expectations they set, amplified by often over-the-top PR. It was the company that led the way in creating some of the best tech products in the world that so many loved. So when they faltered some were eager to criticize, while others, as myself, wanted to point out their mistakes in the hope of fixing them.

Once Cook took over, Apple made mistakes relating to its products frequent enough to wonder what was going on and what were they thinking. Some of the reasons have become more apparent in recent months as inside information leaked out.

The first product CEO Cook personally announced, Apple Maps, turned out to be a total embarrassment.  After personally praising the product as he personally introduced it, it immediately became apparent that Cook had never used the product, because most of us experienced embarrassing navigation issues. I remember how it directed me in the wrong direction to a restaurant in San Francisco, miles away from the correct location, Heads rolled as a result and Cook had to apologize.

We then saw a succession of bad hardware decisions over the years.

These were all decisions that were made for aesthetics and not for function. It was what became known Apple’s obsession with thinness.

As Walt noted, Jony Ive, the head of design, who worked closely with Jobs, was now untethered. He became Apple’s new product visionary and he ran wild. Cook ceded product responsibility to Ive.

The results would have been catastrophic for most companies, but Apple had so much goodwill and its products were generally so much better than competitors, that Ive’s impact was less visible for a long time, aided by Apple’s PR machine lauding every new design tweak, from the “special aluminium” to the “amazing new crown” on the watch .

Now, a decade later after this transition, the evidence is clear. Apple has squandered their advantage and has created products that have greatly diminished its leadership in the notebook arena and has saddled its iPhone users with a myriad of problems because of an obsession with thinness.

With Ive just recently departing, we’ve seen the first MacBook in five years with a reliable keyboard, the MacBook 16″. Fans are hoping it’s the harbinger of a wave of new notebooks that will solve the keyboard issue on all models.

What I remember about the last decade is that Apple entered it with the most innovative, beautiful, and well-designed products ever, and is leaving the decade with line of unreliable notebooks and underpowered phones, both just now being addressed.

In other areas Apple has had better success. It tool Apple three years to fix a lot of Watch problems, but now that it’s in its 3rd incarnation, its an excellent product with no serious competition.  Apple has also had a big success with its Earpods accessory headphones.

The next big announcement for Apple is this Spring and many are hoping for a new line of notebooks with keyboards that finally work.